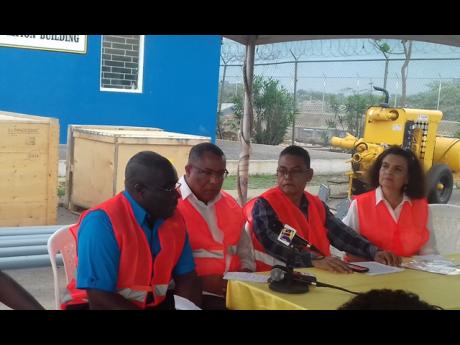 JIS
Minister of Local Government and Community Development Noel Arscott (2nd right), listens to comments from interim executive director of the National Solid Waste Management Authority (NSWMA), Colonel Daniel Pryce (left), at the launch of the Riverton City Access Road project on Friday at the project site in St Andrew. Others (from 2nd left) are: Minister of Industry, Investment and Commerce, and Member of Parliament for Western St. Andrew Anthony Hylton; and Mexican Ambassador Cecilia Jaber.

Minister of Local Government and Community Development Noel Arscott on Friday launched work on the US$1.8 million project for the rehabilitation of the access road to the Riverton City disposal site in Kingston.

The one-year road construction project, slated to be completed in September 2016, is being undertaken through grant funding from the Mexican government. The contract for the undertaking was signed in June.

It will involve the building of a two-kilometre concrete roadway to improve entrance to and exit from the disposal site, and enable the necessary agencies to respond more quickly to emergencies.

Arscott said the use of concrete, which is stronger than asphalt, will eliminate the need for frequent repairs.

He said a steering committee has been formed to facilitate the smooth implementation of the project, noting that several residents will be employed during the construction phase.

Turning to the benefits of the project, Arscott said it will address environmental concerns such as dust during dry periods and mud when it rains.

He said the efficiency of garbage collection for the Corporate Area, St Thomas and St Catherine will improve significantly, as truckers will have easier access to the site without excessive damage to their vehicles, and they will be able do more trips.

He noted that in addition to the construction of the road there are other developments being undertaken.

“A new fire suppressant system, which will help to minimise or end any major fire that might occur on the landfill, is being installed,” he pointed out.

Pryce said the NSWMA administration building at the site is also being upgraded to host the landfill manager, who will supervise all workers, among other duties.

He said also that the scale that weighs trucks going in and leaving the disposal site is also being renovated.

“All these improvements…will greatly enhance the effective running of the landfill,” he said.