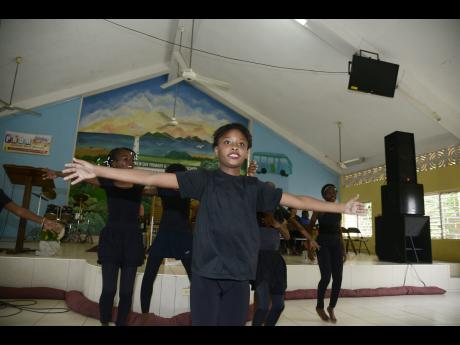 Students at the New Day Primary and Junior High School in St Andrew, were encouraged to exceed expectations following the school's annual prize-giving and awards ceremony, held at the Lighthouse Assembly Church.

Tameka Stephenson, a past student of the school, who was guest speaker at the event, said growing up in the community of Greenwich Town, she is an example of excelling above expectations.

"It has always been my goal to become a doctor. I did not know then, when or how, but I was determined to work hard. Even though gunshots were barking in Grants Pen (St Andrew) and neighbouring communities, I was not deterred from going to school, I just decided to take another route to work," she declared.

"Today, I can proudly say that I have risen above the challenges, in a few weeks after I pass my exams, I will be doctor (PhD). You all can become successful as well," Stephenson charged.

Principal at the school, Garfield McDonald, told The Gleaner that it was a proud moment for him, having to raise the school's average from a mere 33 per cent.

"Nine years ago when I came to the school, the first thing that jumped at me was that something needed to be done about the discipline. I am a believer that if you want discipline to be instilled, you have to raise the standard of academic excellence. When children are engaged in work and teachers are expected to produce what that means is that, everybody will be busy and once you are busy, we expect less problems," he told The Gleaner.

"Myself and the management staff engaged in creating systems in which we could improve on the academic performance and we are seeing where this is paying off. When we started, we were at a mere 33 per cent average. Now I can report that the literacy rate is at 81 per cent and math is at 56 per cent," he said.

"Mathematics is a problem subject, but we are determined to stick to it and that's exactly what our awardees did and today, and we are awarding them. I am a proud principal today. We are not where we are supposed to be, but we have started," he said.

In the meantime, Richard Thompson, deputy director general at the Office of Disaster Preparedness and Emergency Management, who was in attendance and who is also a past student of the institution, underscored the importance of giving back.

"It was always my desire to give back to New Day (school), especially because I am very involved in youth development and I believe that it is essential that priority is given to enhancing young minds," Thompson said.

"It's not how you start, it's how you finish. But while you must have an internal drive, it is necessary that children have the necessary support and resources to enhance their development. I am a proud student and my aim is to be a part of the solution to the school's success," he said.

More than 50 students received prizes. Awards included, top boy and girl, most improved boy and Teacher of the Year award.