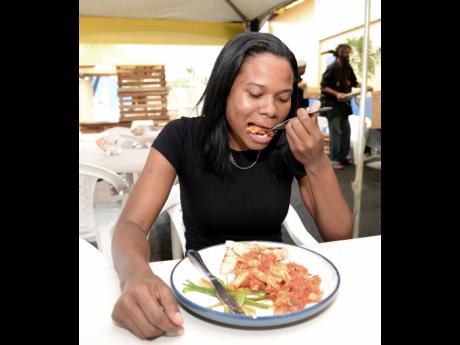 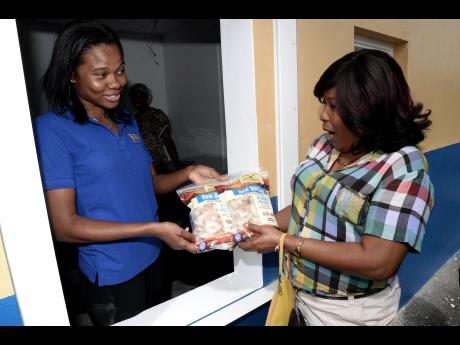 Jermaine Barnaby
Angela Nash (right) was excited as she purchased a meal at a discounted price from Sashanie Taylor at B&D Trawling last Wednesday. 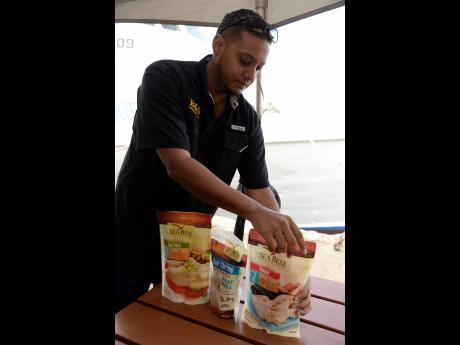 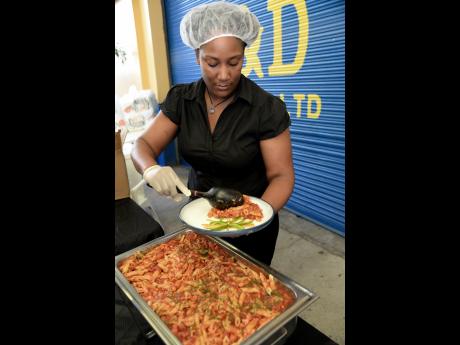 Jermaine Barnaby
A server dishing out a meal at the waterfront facility of B & D Trawling last week. 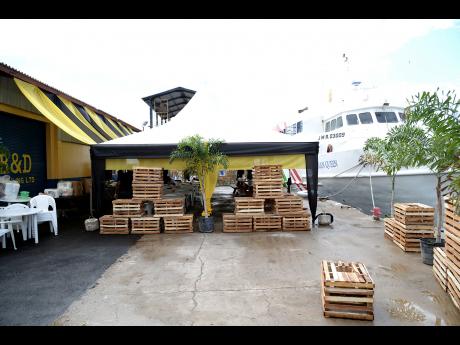 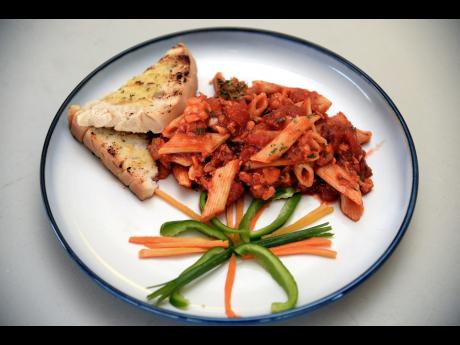 A new entity is brightening the waterfront in downtown Kingston, and last week, residents and visitors to the market district were able to enjoy the best in seafood dishes and purchase from a fish to a fillet at bargain prices.

After dominating the export seafood-market for year, B&D Trawling underscored its commitment to the redevelopment of downtown Kingston when it opened its wholesale arm across from the craft market on the waterfront in the area to be known as Festival Marketplace.

The more than 30-year-old company has also indicated that it will have a retail arm opened at the premises in time for Christmas.

The quality of seafood to be offered by B&D Trawling was on display last week, with a three-day pop-up kitchen, where lobster pasta, shrimp pasta, lobster roles, and other dishes were on sale for $500.

CEO of B&D trawling Roderick Francis said the opening of the wholesale, retail and restaurant outlet was his way of adding to the redevelopment of downtown Kingston.

According to Francis, the facility will provide another venue where people can chill and enjoy some good food in the market district. But the food will not be the only thing of quality, as the decor of the restaurant on the waterfront is something to boast about.

With a cooling breeze coming from the Caribbean Sea, Francis said the finished facility will be opened this month, and he is expecting to see the smiles on the faces of visitors to the area.

"Many companies try to produce and focus on quantity, but this is a quality that has been doing well on the export market, to the point where our products are in high demand abroad and we cannot fill that gap," said Francis. "This quality is also demanded in the Jamaican market."

The company, which will be looking to employing about thirty more people, is expected to expand its products with the recent deal with United States seafood giant Beaver Street Fisheries.

But local fishermen will not be left out, as B&D is increasing its demand for catches from the waters around Jamaica.

"We have been getting the best-quality products from our local fishermen, and though we have big boats, we also work with the small fishermen as a way to support them in a mutual relationship, and they provide us with the best-quality catch," said Francis.

The Festival Marketplace is a concept of the Urban Development Corporation (UDC), which has indicated that it intends to spend $100 million to make this a reality.

"We are putting in a Festival Marketplace for entertainment and restaurants. What we want to do is to return life to downtown Kingston after 5'O clock in the evenings," said chairman of the UDC, K.D. Knight, at a media briefing in February.

According to Knight, the Festival Marketplace is to be constructed on 8.9 acres of prime land, and will be one more element and attraction in the development of the Kingston Waterfront.

"It will be an extension of the renewed market and commercial districts to the north, as well as the terminal point of the existing east-west pedestrian arcade and promenade," said Knight.