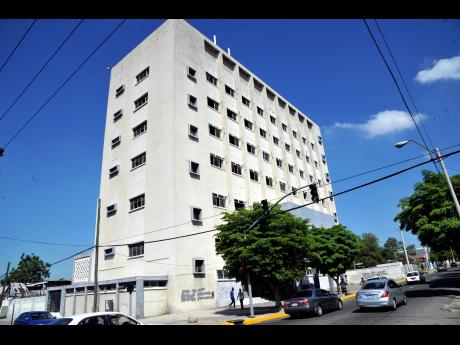 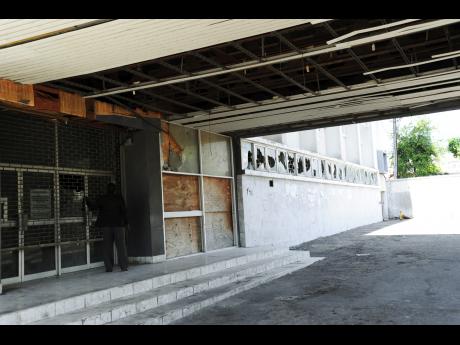 Norman Grindley
A reporter peers through the grill that blocks the entrance to the old Jamintel building. 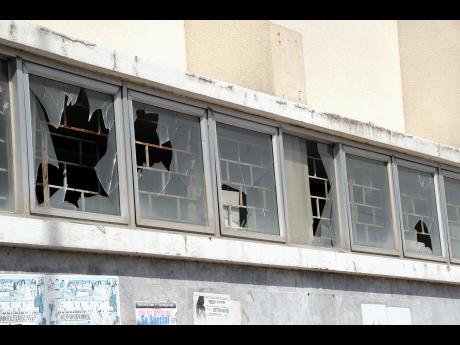 Almost seven moths after it received Cabinet's approval to spend $370 million to renovate the former Jamaica International Telecommunications Ltd (Jamintel) building in downtown Kingston, which it recently bought from the Urban Development Corporation (UDC), the Transport Authority is yet to start the work because of bureaucratic delays.

According to the Transport Authority, it is awaiting approval for the planned renovation from the relevant agencies, including the Kingston and St Andrew Corporation (KSAC).

The Transport Authority spent $150 million to acquire the building, which has been unused for several years, and indicated that it would spend up to $440 million to relocate its corporate offices to the premises.

Once it gets the green light, the Transport Authority said it will begin the tendering process for the refurbishing works.

"The process should be done in another week or two. We are awaiting a second internal inspection on the building for a second opinion," Hill told The Gleaner.

"There are some defects in the architecture that the KSAC engineer has some concerns about, but we are going to look at it this week and sort out the paper work for it," added Hill.

The Jamintel building, which is located at the corner of Duke and North Streets in downtown Kingston, was once the island's hub for telecommunications before it was shuttered in 2004.

The National Housing Trust (NHT) acquired the building from Cable and Wireless Jamaica for $76.1 million in 2005.

Initially, the agency planned to swap the building for property on Hope Road controlled by the police and used as headquarters for the police commissioner, but which is considered prime real estate for upscale residential development.

NHT planned to transform the Hope Road property, which is part of the Golden Triangle, into town houses for young professionals.

The police, however, rejected the arrangement, saying parking space was insufficient at the Jamintel building and that the location raised security concerns in the volatile downtown Kingston zone.

The Jamaica Fire Brigade, which was in search of new headquarters, had expressed an interest in the building, but this plan was also scrapped.

There was also a proposal for the 65,000-square foot property to house the Traffic Court and the Family Court, but that also ended as a still-birth.

In 2008, following a change of political administration, the property was taken back off the market before it was acquired by the UDC.

Now that it has been taken over by the Transport Authority, the building should house the administrative operations which are now taking place at 119 Maxfield Avenue and its operations team which is now housed at 109 Maxfield Avenue.

"The Authority has had to retrofit containers to ensure proper storage and management of its records. In simple terms, the Authority's operations have far outgrown its current locations," said Dr Morais Guy, minister without portfolio in the Ministry of Transport and Works, as he announced the purchase of the building.