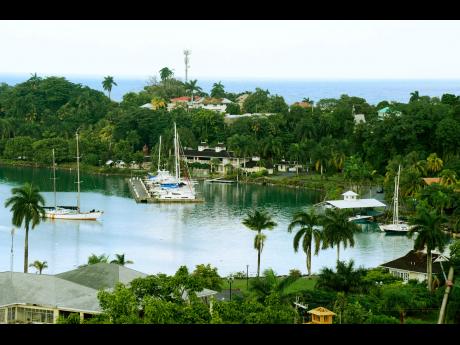 Some 13 years after construction, the Errol Flynn Marina, located on the Ken Wright Pier in the heart of Port Antonio, Portland, is struggling to fully realise its marketing potential, or attract on a consistent basis high-end tourists, especially the yachting elite from Europe and North America.

On a rainy day when The Gleaner visited to host its jobs, growth and opportunity forum in the parish, it was obvious that the 32-slip mega-yacht facility was still a far cry from the star billing associated with the famous, swashbuckling American actor whose name it bears.

The plastic bucket which adorned the centre of the floor to collect the water coming through the roof was a slight distraction, to say the least.

"The intention at first was to attract mega yachts to the facility but that did not materialise, at least not yet," then general manager, Dale Westin, said in a January 2012 interview. Time, it seems, has stood still in the three years since.

Definitely underutilised, the Errol Flynn Marina is touted for its immense potential, but getting that talk translated into a consistent income-generation stream continues to elude the management/operators. For area businessman, Gordon Townsend, this is a major puzzler.

"We have one of the nicest marinas in the Caribbean, and if you travel around the Caribbean to Antigua and other islands, the venues are incomparable but nobody knows about it," he told individuals gathered for the forum.

"We have lots of boats in tourism on the north and western end of the island and they have to go to Florida to be serviced, when we have a marina here; with a little bit of change in design, we could have them here," Townsend lamented.

Fellow businessman Errol Hanna, who operates the Cliff Hanger Restaurant and Lounge, was even more forthright in his comments.

"Beautiful marina; $13 million spent on it; mega yachts promised; nothing happening. It's just here as a white elephant."

But Larry Robertson, chairman of the Resort Board, is confident that the investment in the world-class facility will pay off in the long run.

"The marina is a monument," he declared. "I say this to say that it will be here; we will maintain it. We are hoping that it will attract more business coming here. There are plans for the marina," he said.

The Resort Board recently financed an overseas tour for a delegation to go on a market trip which the chairman says will begin to pay dividends very soon.

He said: "This delegation looked at getting more ships coming every Friday, starting in December, for the next six months. We are hoping that these agents will buy into this deal and that the marina will be more active. We are not waiting on the Port Authority (of Jamaica, which owns the property). We are trying to do our own little marketing to really sell the tourist product."

Wayne McKenzie, mayor of Port Antonio, shared the view and optimism that the town's white elephant, with the right stimulus, could eventually morph into the cash cow it was envisaged to be at the design stage.

"We established recently a committee, and its objective is really to find creative means to engage persons and market the town. Encourage yachts to come in because the marina has potential," he noted.

Located in the heart of a bustling town, the Errol Flynn Marina provides a haven from the madding crowd.

Strategically located across from Navy Island, it makes for a peaceful getaway and caters to visitors' every pleasure, what with a promenade, gift shop, ice cream parlour, pool bar, two restaurants with bar, Internet access and much more.