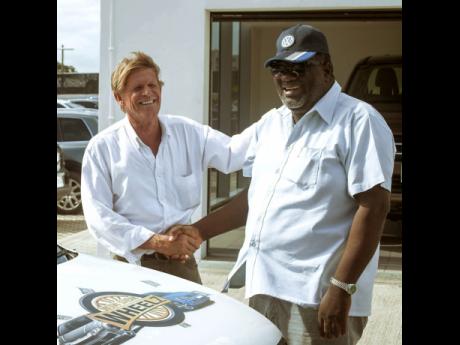 The first winner of the 'Win Dem Wheelz' car raffle has come forward.

The new car raffle game, powered by Raffprom Limited, Supreme Ventures Limited, and ATL Automotive Limited, guarantees one winner every week. This week's winner, George Washington Nelson, was in shock since discovering he had the winning ticket in his possession.

At the ATL Automotive showroom, where he chose his prize - a VW Jetta - Nelson recounted to the ATL team that he was actually encouraged by a friend to purchase tickets after they sat at work and saw an advertisement on the TV.

Nelson said he purchased five tickets on Saturday night, an hour before ticket sales were closed for the first weekly draw. He said it was his wife who encouraged him to call the Supreme Ventures Customer Support Line, where he discovered he had the winning ticket.

"The phone fell to the ground; I couldn't believe it!" Nelson recalled with a chuckle.

He said the win was "almost unreal", as he had been without a vehicle since his car was stolen two years ago.

The win, also, could not have come at a better time as Nelson and his wife will be celebrating 20 years of marriage this month.