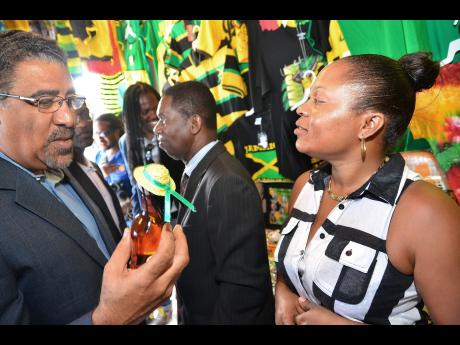 File
Tourism and Entertainment Minister Dr Wykeham McNeill examines a product sold by Portland craft vendor Jennifer Brown in her shop operated in the Portland Craft Village in Port Antonio during his visit to the facility shortly after it was opened last year.

Once Left to rot or be annihilated by the forces of nature, the new-look craft village at Allan Avenue in Port Antonio is now a picturesque beauty with its wide array of locally made items on display.

The beauty and splendour of the facility is as a result of approximately $9 million spent by the Ministry of Tourism, through the Portland Parish Council, to rehabilitate the craft village, which was in ruin for the better part of 15 years.

Business operators and other interests, who were present during a recent Gleaner forum held in Port Antonio, spoke about the importance of the craft village, which has finally opened its doors, offering vendors an opportunity to make a living

"And, of course, there are challenges at the craft village, especially as it relates to sewerage. However, the Tourism Product Development Company has committed some funding to correct the sewerage problem. There is also a bar and a restaurant at the new facility, and locally made craft are available, along with other items that are bought elsewhere for resale."

Work on the original craft village started in 1998, under then tourism minister Francis Tulloch, at a cost of $28 million. The state-of-the-art craft village was originally designed to house approximately 90 vendors, who were operating at the rear of the Musgrave Market in the congested town of Port Antonio.

However, work was halted in 2002 and sections of the building were vandalised.

In 2013, $8.9 million was committed by the Tourism Enhancement Fund to renovate the facility.

Despite the doubts of many, the facility has been utilised, although a shortage of shops has prevented other vendors from relocating from the Musgrave Market.