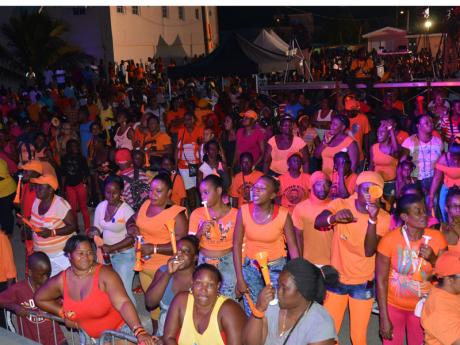 Hundreds of People's National Party (PNP) supporters have converged in the Hanover capital for another in the series of mass meetings of the governing party as it prepares for the impending general election.

At tonight's rally, incumbent western Hanover MP Ian Hayles and Lucea Mayor Wynter McIntosh, the proposed candidate for Eastern Hanover, will be officially presented as the PNP's standard bearers for the next national poll. Earlier this year, there was unease in the parish when the sitting Eastern Hanover MP DK Duncan pulled out the race for chairmanship of the PNP's Region Six after Hayles indicated that he too would be running for the post. Hayles who was eventually elected chairman has since been meeting resistance in his Western Hanover seat over of his level representation.

Meanwhile, to facilitate this evening's rally, traffic has been barred from entering the Willie Delisser Boulevard in Lucea while Main Street, generally a one-way thoroughfare, is now accommodating two lanes of traffic.