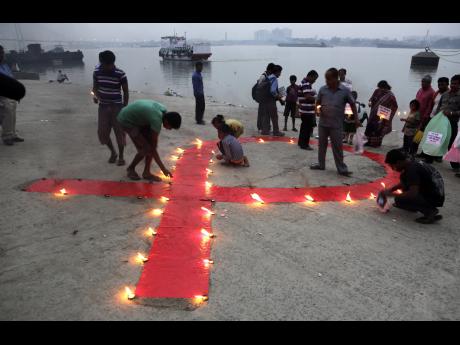 AP
In this Tuesday, December 1, 2015 photo, volunteers of a non-governmental organization light lamps on a giant red ribbon, the symbol of solidarity with people living with HIV/AIDS, during an awareness rally on World AIDS Day, on the banks of the Ganges River in Kolkata, India.

- In 2011, young people accounted for 40 per cent of all new adult HIV infections, and 80 per cent of new infections occurred in sub-Saharan Africa..

- In 41 per cent of UN General Assembly Special Session country reports reviewed in 2010, less than 30 per cent of young women with more than one sexual partner used a condom at last sex.

- According to the most recent population-based surveys in low- and middle-income countries, only 24 per cent of young women and 36 per cent of young men responded correctly when asked five questions on HIV prevention and misconceptions around HIV transmission.

- In Asia, more than 95 per cent of all new infections among young people occur among most at-risk adolescents.

- Central and South America have had minimal change in the epidemic in recent years which is mainly concentrated among men who have sex with men.

- In 16 out of 21 countries most affected by HIV in the world, a decline in prevalence of 25 per cent has been noted mainly because young people are choosing to wait longer to become sexually active; they are having fewer multiple partners; and have increased the use of condoms among those with multiple partners.