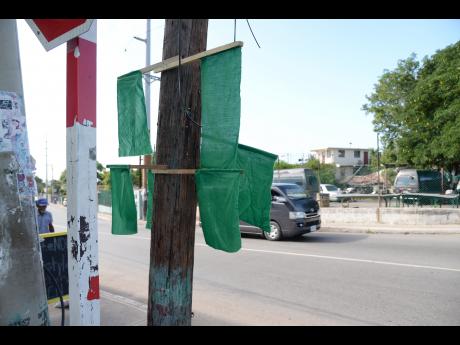 Jermaine Barnaby
Political flags hoisted on a post on Mountain View Avenue in the Corporate Area.

The flare-up of violence in Newlands, St Catherine, with its political undertone, has prompted some civic groups to issue a warning to the political parties that Jamaica is not prepared to accept a bloody general election.

While the police are yet to determine if politics was at the heart of the killing of Saidie Forbes and Jermaine Vassell in Newlands last Tuesday, the groups have called on the leaders of the People's National Party and the Jamaica Labour Party to take a firm stand against any violence whatsoever.

In a joint release yesterday, National Integrity Action, the Private Sector Organisation of Jamaica, the Jamaica Chamber of Commerce, the Jamaica Manufacturers' Association, the Women's Resource and Outreach Centre, and the Jamaica Environment Trust declared their determination not to accept political violence and election malpractice.

"Now, more than ever, it is absolutely necessary for strong leadership and civic-minded citizens to display determination to transform negative aspects of what too many regard complacently as part of Jamaica's political culture," said the groups.

"In this regard, none of us should any longer put up with breaches of the agreed Code of Political Conduct, which states, 'There should be no defacing of any structure, roadway or installation (whether publicly or privately owned) for the purpose of displaying any political message or slogan except in such a manner as is permitted by law'."

"Leaders should, therefore, demand that followers no longer put up, and immediately take down, orange or green flags on light posts or other structures," said the groups.

They argued that no longer should Jamaicans put up with vote buying and vote selling as "part of the runnings" in clear violation of Jamaica's Representation of the People Act.

"In this regard, citizens should report any observation of such illegal conduct to the police or any of our organisations. Moreover, the police should put in place measures to detect, deter, and/or prosecute persons of whatever political persuasion involved in this unlawful practice," said the groups. "We wish to stress that Jamaicans should allow no one, whether party leader, political officials, or activists, to in any way taint Jamaica's hard-won gains as a model country in the region and in the international community for free and fair election, without violence, intimidation, or irregularity," added the groups.