Firefighters struggle to cope with limited information on downtown fire 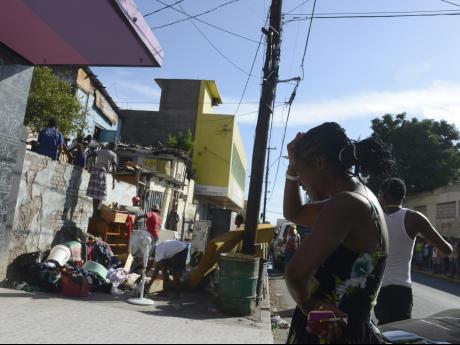 This woman looks on in disbelief as other residents attempt to rescue furniture and other possessions from the burning building. 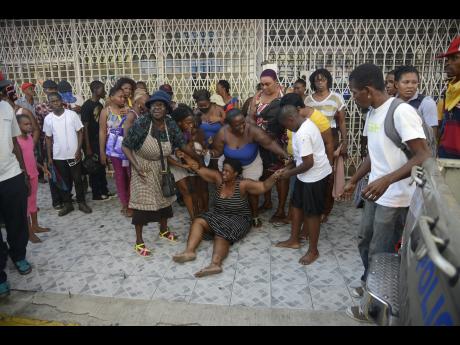 Residents attempt to comfort a woman traumatised by the site of her home going up in flames. 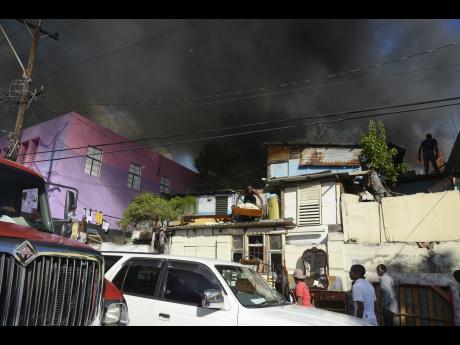 The burning premises on Church Street and Mark Lane in downtown Kingston, which served as home to approximately 80 persons, including 30 children. 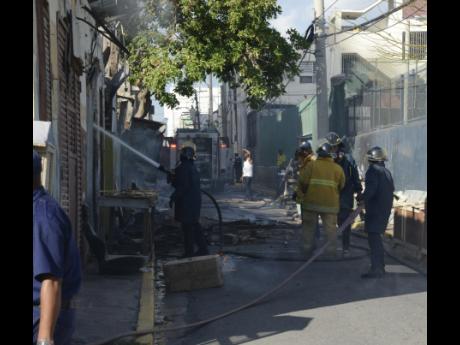 Firefighters attempt to put out the blaze.
1
2
3
4

Firefighters and police faced heavy challenges on Saturday as they tried to gather information on a fire that razed a premises on Church Street and Mark Lane in downtown Kingston.

Residents said that the fire started about 2 p.m., allegedly by a boy as he attempted to prepare a cup of noodles. It quickly spread throughout the two-storey wood and concrete building between the two roads before moving on to adjoining premises.

Except for three nasty scrapes on Shaneka Williams' back, which relatives said she obtained after fainting at the sight of her burning home, no one was injured in the blaze. There were some close calls, however, as men scampered above and below falling concrete to save a few appliances.

The premises, residents said, was home to about 80 people, about 30 of whom are children. On Saturday, firefighters and at least one policeman probing the blaze had a hard time reaching that number.

"We have to go in and write our report, so we have to try to find out exactly what happen and who was affected," said one senior fireman as he and a policeman tried hard to persuade the owner of one of the affected adjoining premises to give a statement at the station.

The two servicemen ran back and forth among persons claiming to be residents trying to gather information about their losses. The policeman seemed to be met with the heaviest resistance from the grieving group that watched the fire from a distance.

"You see, we have to go back in and write our report as best as possible, but some people don't want to cooperate," added the firefighter.

"I can't even tell you what may have been burnt in there because a lot of people are telling us about a lot of things that they lose, but when you see the place, you know that all of those things couldn't hold in there," he said.

Residents accused the firefighters of turning up late at the scene and being unprepared. The senior fireman declined to speak on those accusations but said fire units from York Park and Half-Way Tree responded to the calls.

But as the servicemen struggled with their jobs outside, Glasford Williams grew tired, struggling from carrying buckets of water to douse the blaze. The elderly carpenter lost many of his tools, materials, and even finished work in the fire.

Williams said his Christmas plans had come to a burning halt.

"I have at least 10 of them depending on me - and I'm not talking the outside people them that I usually give things every Christmas - my family. The tools dem gone. Is not even like me can just start some new work," he said.