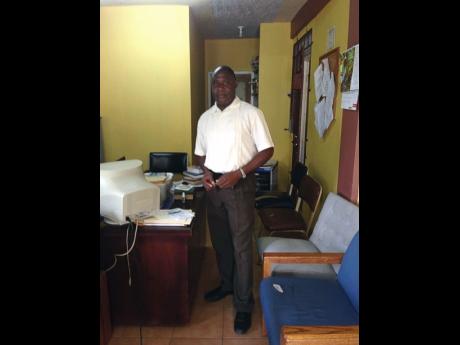 Despite experiencing sacrilege resulting in hundreds of thousands of dollars worth of equipment stolen from the Jericho Baptist Church in Linstead, Pastor Reverend Valentine Wallace is looking to brighter days.

"This is the fifth time in as many years that we have been burgled. What is troubling about these break-ins is the fact that it happens this time every year," he said, making reference to the Yuletide season.

Wallace who has been the host pastor for the last 14 years said he is always telling the congregation that he does not believe in iron grilles as a deterrent.

"After this time, I am inclined to change my mind; this one really hurts," said Wallace, pointing to the theft of a laptop that stores the church's important data and two large speaker boxes during last week Monday's break-in.

Microwaves, laptops, software, ceiling fans, are among some of the items stolen from the church.

Broke in through window

Thieves allegedly broke into the institution which sits atop a hill, gaining access through a window by removing several panes of louvre blades. They also cut the locks on the pastor's office to gain entry.

Even with this loss, Wallace strongly believes that the Church's mandate must still be carried out through its outreach ministry.

"We at the Jericho Baptist Church operate a very vibrant outreach programme where we fund educational initiatives, we stage kids treats, hand out books, clothing and footwear to our members and the public," the Baptist pastor stated.

He said the Church has a responsibility to be relevant to its members.

"Speaking for myself and not the Jamaica Baptist Union, I believe in touching lives and creating great impact in people's lives, so reaching out to people who are less fortunate is what Jesus expects from churches," he told Rural Xpress.

Wallace revealed that the Church is exploring methods to do more outreach activities in the community.

"We are looking at ways to see how best we can make an impact. The Church has 15 acres of land and I am thinking of going into agricultural food production," Wallace declared.

According to him, this initiative will help to address the unemployment problem now being experienced by young people in Linstead and other communities.

"Church members and the community at large will supply the labour force for this project. It will provide employment for the young people as well as provide the necessary funding to expand the work of the Church," he added.

Wallace added: "When we are able to carry out the things that Jesus expects of us, only then will we be carrying out his wishes."