Pay up! Court rules that common-law spouse of dead cop is entitled to full benefits 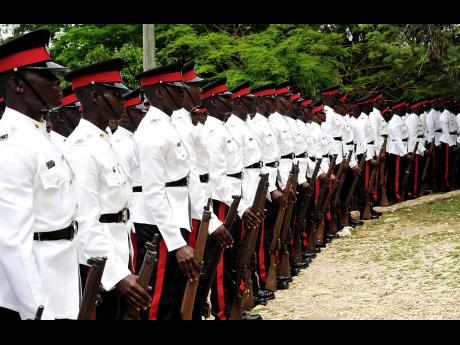 File
Police constables during a graduation during a ceremony at the Jamaica Police Academy in Twickenham Park, St Catherine.

The Supreme Court has ruled that the common-law wife of a member of the Jamaica Constabulary Force (JCF) is entitled to widow's pension and allowances, once the couple lived together for more than five years.

Winsome Bennett, a teacher of Golden Grove, St Ann, went to the court following the death of her common-law husband, Inspector Carlton Roy Campbell, on September 22, 2008, and the JCF refused to pay her the benefits.

An order was made in the Supreme Court on October 1, 2009, declaring Bennett the common-law wife and sole surviving spouse of Campbell within the meaning of the Intestates' Estate and Property Charges Act.

A letter was sent to the Ministry of Finance in December 2009 requesting that Bennett be informed as to the gratuities or pension payable to Campbell's estate.

Did not qualify for payments

She was informed by letter in September 2010 that the ministry reviewed the estate, and in accordance with the Constabulary Force Act, a decision was made to pay a pension to Rory Campbell, son of the deceased, and a gratuity to the legal personal representative of the estate.

She was also told that no death benefits would be paid to her, "as it was the view of the Ministry of Finance and the Public Service that she did not qualify for such payments as she was not legally married to the deceased and was not his widow or surviving spouse within the meaning of Section 62 of the Constabulary Force Act".

Bennett took the matter to the Supreme Court in 2012, contending that such a determination was contrary to the Intestates' Estate and Property Charges Act and was in breach of the order the court made in 2009.

She asked the court to make a declaration that as the declared spouse of Campbell who was a member of the JCF, she was lawfully eligible for a widow's pension and other allowances.

She sought an order directing the defendants, the Minister of Finance, the Attorney General and the JCF to pay her the widow's benefit/pensions and other allowances payable on Campbell's death.

Justice Lennox Campbell heard the matter and last Friday handed down, what persons in the legal profession have described as a landmark ruling in Bennett's favour.

Lived together until he died

In her affidavit, Bennett disclosed that she met Campbell in 1971 and an intimate relationship developed between them.

They had a daughter born in 1973 and later in the 1970s the relationship ended. The relationship resumed in 1991 and they started living together that same year, and continued to live as man and wife until he died.

Attorney-at-law Akin Adaramaja, instructed by the law firm Forsythe & Forsythe, who represented Bennett, argued that the issue before the court was how the term "surviving spouse" is to be construed.

Lawyers representing the defendants argued that Bennett was not a "surviving spouse" for the purposes of the Constabulary Force Act.

Justice Campbell, in reviewing the relevant laws and authorities, said the definition of "spouse" may include a married or unmarried person for the purposes of establishing property rights of spouses.

He said the ordinary word is to be determined by the understanding of the ordinary man using the word in its popular sense.