New variety of Irish potatoes to reduce importation of fries 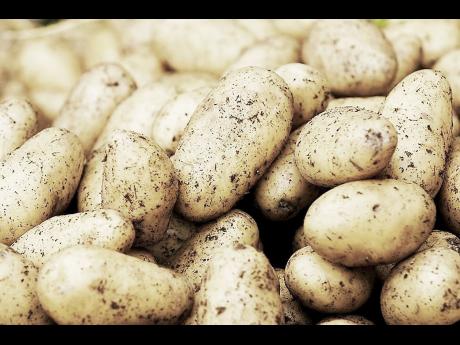 The country's importation of fries could be reduced by at least 30 per cent over the next three years, with the Ministry of Agriculture and Fisheries' introduction of the 'Challenger' variety of Irish potato, deemed ideal for producing this popular fast-food item.

Noting that, seven million kilogrammes of fries are imported annually at a cost of $700 million, Portfolio Minister Derrick Kellier said the ministry will be "accelerating our work" on the production of the Challenger, which was identified in its evaluation as the most suitable for producing the value-added item.

"It is important that we speed up this process of testing and planting. This will require an additional 1,100 acres (of land) to be put into production, and the engagement of a minimum of 400 new farmers," he noted.

The minister was speaking at last Thursday's launch of the ministry's National Potato Expansion Programme for 2015-16, at Argyle Farm, New Pen, St Mary.

Kellier said increased production of Irish potato "will not only be saving foreign exchange, but will create more jobs for our people".

Meanwhile, the minister informed that the ministry has spent approximately $8.5 million since 2014, to undertake further development of a sustainable local sweet potato industry to supply produce for the domestic and export markets.

He said the allocation has mainly financed a clean seed programme through which over 1.47 million sweet potato slips (green shoots used for planting) of the new 'Beauregard' variety have been distributed to more than 30 farmers, who have cultivated approximately 80 hectares of the crop in eight parishes

The minister also noted that more than 300 farmers will be engaged in the cultivation of approximately 140 hectares of onions during the 2016 crop season.

He said annual onion imports average approximately nine million kilogrammes valued at $480 million (US$4 million), and the project aims to revitalise the subsector's output by realising a minimum 40 per cent increase in local production by 2017.

"The target over the next few years is to move local production to a level that will satisfy up to 70 per cent of demand," Kellier added.

The National Potato Expansion Programme, being funded at a cost of $911 million, is targeting the cultivation of 1,200 kilogrammes of produce to fulfil local demand.

This will include 850 hectares being planted in Christiana, Manchester; 300 hectares in Guy's Hill, St Catherine; and the remaining 50 hectares "scattered across other parishes," Kellier informed.