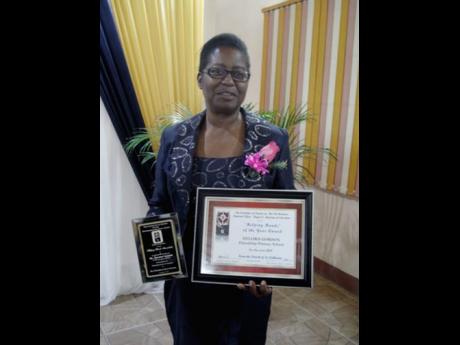 A co-author of several books, including Making the Church Family-Friendly and Parenting Towards the 21st Century, Deloris Gordon, vice-principal of Friendship Primary School in Clarendon, has been making a positive impact on the lives of others.

Gordon has served on several committees and continues to be a member of numerous organisations, including the Coalition for Better Parenting, the Mandeville Kiwanis Club and Chamber of Commerce, as well as the Private Sector Organisation of Jamaica.

She has always gone above and beyond the call of duty in whatever she does, so much so that her colleagues often label her as being overcommitted.

"Commitment is one of my hallmarks. I always say once you're doing something, always put your all into it, and because I love what I do, I put my whole self into it and give it my best shot," she told Rural Xpress.

"I think I pick this up while working with my husband when he was principal. Being his wife, I always wanted to make sure everything is done all the time, so this has become a part of me since then."

She has played many leading roles at Old Harbour High School, working alongside the principal. These included oversight of staff welfare and aiding in the development of the Academic Staff Handbook. Gordon, an energiser bunny, still finds time to work in her Manchester community with the needy and the indigent. She has plans to eventually establish a special education unit for at-risk students, as well as a health facility for abused, neglected and needy children.

For her hard work and dedication over the years, Gordon was nominated and presented with the Committee of Friends of the Old Harbour Region VI Ministry of Education 'Helping Hands Award'.

The award is presented to a vice-principal, a dean of discipline, a guidance counsellor, or a work experience staff member who has been most supportive of the administration.

Gordon was pleasantly surprised when she was informed that she was nominated and selected for the award. "I am happy that I was selected and it shows that people have seen that I have been doing my bit here and there and thought it fit to reward my efforts," she said with a warm smile.

The award was presented at the Committee's Ninth Annual Dinner and Awards ceremony held in Clarendon recently under the theme 'Begin with the End in Mind: Maintain Your Focus.'