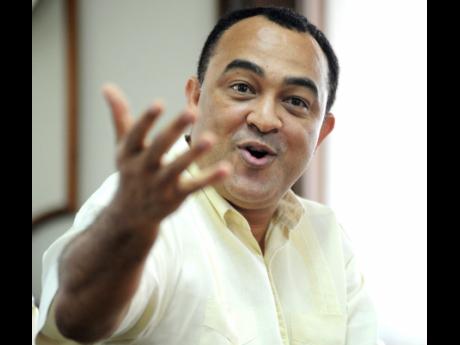 Like the Prodigal Son of biblical fame, Dr Christopher Tufton was ushered formally back in the fold of the Jamaica Labour Party (JLP) to great embrace on and offstage.

It wasn't a 'father figure' of biblical stature who had rushed to greet Tufton but the throng of green-clad Labourites who reacted with thunderous applause.

It was only Juliet Holness, wife of JLP leader Andrew Holness, who could compete with Tufton for the rapturous cheers showered during the presentation of the slate of candidates.

Reminiscent of the biblical character, Tufton quietly took the stage after the announcer, Desmond McKenzie, announced his name and spent less than three minutes addressing the cheering throng.

"There is unity in strength," was Tufton's quiet declaration to the public meeting.

Sobriety returned when McKenzie reminded the crowd that Tufton was replacing long-serving, outgoing member of Parliament and JLP stalwart, Dr Ken Baugh, who is still hospitalised.

Holness' wife Juliet appeared just as sedate in response to the deafening cheers, with predictions being sounded that both West Central St Catherine and East Rural St Andrew will be in the JLP column on the night of the upcoming election.

Tufton saw his political fortunes dipped over the last four years after being at the losing end in a narrow upset against then PNP neophyte in South West St Elizabeth, Hugh Buchanan.

His attempts to reclaim a seat on the JLP ticket encountered one obstacle after another that culminated in his narrow loss to Devon Wint.

Tufton replaced Wint under mysterious circumstances at the eleventh hour, as many thought that a general election would have been held this year.

There was no sound of discordance when his name was announced among the 63 candidates in Old Harbour, South West St Catherine.