Volunteerism pays off for university student 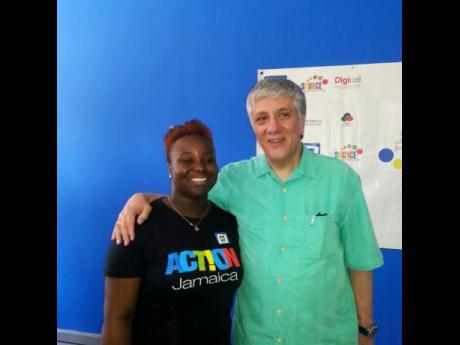 Contributed
One of the highlights of Kimone Montique's Summer of Service experience was undoubtedly the visit of United States Ambassador to Jamaica, Luis G Moreno, who provided a candid talk to participants of the Senior Summer Camp at the Source Centre. Here, Montique captures a moment with the ambassador. 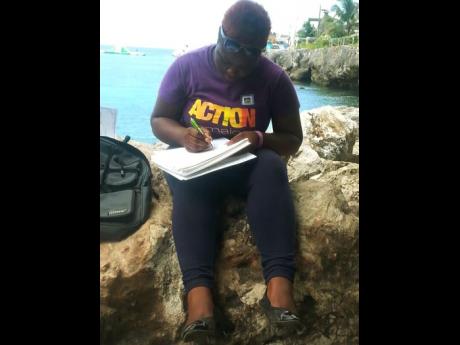 Contributed
Montique, while on a field trip with the summer school participants, dedicates some time to sign copies of certificates for attendees.
1
2

Two weeks before she was supposed to attend university, Kimone Montique felt her new journey would never be possible as she ran out of options and didn't know how to pay her tuition.

"I didn't have it, and my parents were not able to find all of that money," she said. "But, shortly after that, the news came, and I was able to attend The University of the West Indies (UWI) as a recipient of the governor general's I Believe Scholarship."

A computer science undergraduate student, Montique is one of the first I Believe ambassadors to receive a full scholarship for the duration of her studies. It was awarded based on her performance as a Governor-General Summer of Service volunteer. As a participant, Montique worked at The Source Savanna-la-Mar Summer Camp as a director, where she led two camps for junior and senior students.

"I worked with a team of 15 other volunteers to organise and execute the classes and activities for more than 100 children. And, I also helped to raise funds for the staging of the camp through crowdfunding, as well as donations from businesses in the surrounding communities," she said.

Describing her experience as enjoyable and fulfilling, Montique was quick to point out that her involvement at The Source started several years ago, when she first volunteered as part of a graduation requirement of her high school, Hampton.

"I came across this centre while I was in fourth form and I chose to give voluntary service there as part of my school's requirement to graduate. We were mandated to complete 40 hours, and I actually logged some 230 hours. And, ever since then, I have been going back to assist in various capacities," she said.

Subsequently, during her final year, her love for volunteering led her to apply to become an I Believe Ambassador by applying for the annual Summer of Service competition. Upon receiving approval, she was required to lead a project, and based on her existing affiliation with The Source, volunteered to remain there.

"The Source is my heartbeat. Every holiday since I started there, I went back. I love what the facility does for persons in the surrounding communities as many of them live in under-resourced communities," she said. "The Source provides the opportunity for adults to better themselves and for children to be exposed to useful resources, valuable training, and academic opportunities to be better able to rise above their circumstances."

Now settled and ready to make the best of her experience at UWI, Montique says the opportunity provided to her was due to the excellent work and leadership displayed during her participation in the Summer of Service programme. Not expecting a full scholarship, she said the announcement brought a range of emotions.

"When the announcement was made at the graduation ceremony, I was stunned and elated at the same time as leading up to September, I recall having a discussion with Julien Pringle, The Source administrator," she said. "And I was telling them that I had no money to pay my tuition. I told him I was out of options, and my dream of going to university was looking increasingly dim."

Reminiscing on the grand announcement, Montique says the reaction of her parents, who are both self-employed, will forever be etched in her mind.

"I remember calling my mother after the ceremony telling her to call me back because I had limited phone credit. When she called me back, I told her that I received a scholarship and it was not for one, but three years," she recalled. "And all I heard was a piercing scream, she was so overjoyed! And my father was overwhelmed. All he could say was just how proud he was of my achievement."

With volunteerism being second nature, Montique said participating in activities at The Source definitely helped mould her positively. She vows to always give her time and expertise to worthy causes and to encourage other young people to volunteer in their free time.

"It is something that I love and I was rewarded for it ... . Not only because of the scholarship I received, but from the lifelong lessons and cherished experiences.

"This Summer for Service scholarship has really helped me, and I do believe that it is my duty to do the same for others who are most vulnerable," she said.