From a Christian household to Islam: Mustafa Muwwakkil tells why he 'reverted' 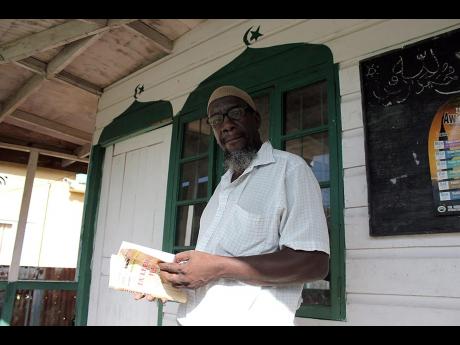 Although he grew up in a traditional Christian household, 40 years ago, Mustafa Muwwakkil decided to become a Muslim and today operates as an Imam (Islamic leader) at the Masjid An-Nur mosque in Port Maria, St Mary.

Muwwakkil is an agreeable and devoutly religious preacher who is fluent in Arabic and describes himself as a Muslim 'revert,' rather than a convert.

Speaking earlier this week outside the 26-year-old mosque, he said that 'exclusivity' was the primary motivation behind his decision to reject Christian values in favour of Islam.

Muwwakkil told Family and Religion: "The fundamental reason I accept Islam is the strict principal of the oneness of the Creator, and the way Allah describes Himself in the Qur'an.

"Islam separates the worship of creative matters from the worship of the Creator, which means we don't worship anything that is created. That is the beginning of everything; the Creator is absolute, and there should be no sharing of His worship with anything or anyone."

Muslims have resided in Jamaica for many centuries, and although St Mary is home to two resilient communities, Muwwakkil believes life in the parish is becoming more challenging for them.

He explains: "Islam has been in Jamaica since before everything (laughs). [14th century African emperor] Kankan Musa used to come here to the west on his voyages; and when Columbus came, in addition to the Arawaks, he found people who were runaway slaves that ships had left behind; a lot of them were Muslims.

"In St Mary, there communities here and in Albany. We consider ourselves strong, not because we have physical strength; but in a place where the economy is not so bright and life is not so chirpy, to hold on to Islam, you are confronted with a lot. You have to create your own employment that is within the line of Islam and live a certain way, and it's not easy."

Muwwakkil, who was born and raised in Port Maria, insists life can be tough for adherent Muslims, but notes that people generally, irrespective of their faith or denomination, are becoming less religious.

He said: "When I was younger, Christians were different people, and I can say the same about Muslims. It's human kind, we don't necessarily get better, but that doesn't mean you should contribute to making it worse.

"We as Muslims are ordinary people going about our business as ordinary Jamaicans, sometimes, apart for the dress code, you don't even notice us."

In 2016 and beyond, the Port Maria-based preacher hopes to see more balanced mainstream media coverage of Muslims, as he believes this is one of the biggest problems followers of Islam face.

He said: "We can't control who wants to be Muslim and who does not, but once you read or hear the real Islam, you can make a choice about what is genuine. But if you're going to make a choice based on propaganda, that's unfair.

"I'm not expecting anyone to accept Islam en masse because I believe you can't condemn or condone something you know nothing about, but once they have the knowledge and truth, people can make a choice."