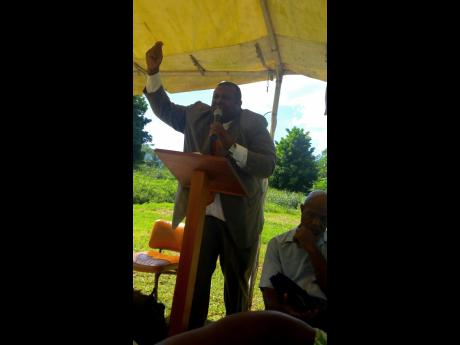 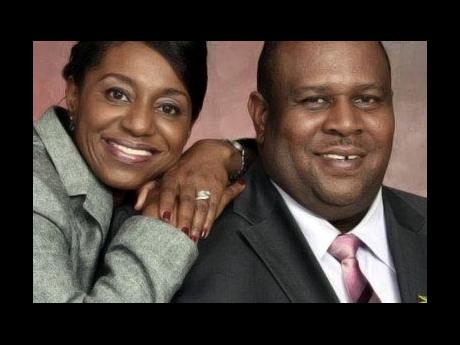 Contributed
Hinds with wife of 18 years, Marjory: 'My wife is my greatest support, I call her 'my handbag'. 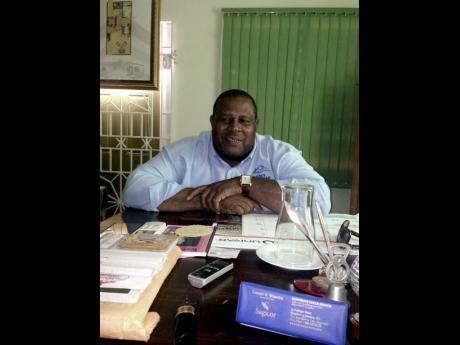 For some aspiring Christians, the struggles to maintain a life pleasing to God is an ongoing one that can only be sustained by living a spirit-filled life guided by the oracles of Christ, revealed in His teachings.

For some pastors, the issue of relevance is centred around what they consider the delivery of spirit-filled sermons capable of winning souls for Christ.

"More spirit-filled sermons are needed today. There is a difference between pastors who deliver written sermons and those delivered without prior preparation by messengers of God - who are called by God," stated pastor of the Light House Worship Centre in Stanton, Bog Walk, and former mayor of the Portmore Municipality, Keith Hinds.

"Souls are going to be saved when the Spirit of God is delivering the sermon through the vessel He selected to do so or the One who is called by God," he continued.

Recounting his own struggles to attain the level of spirituality that eventually sets the stage for his ordination as a minister of the gospel, Pastor Hinds recalled 20 years of his life when he left the faith.

"Those were the worst days of my life even though some might consider it great because of the mayoral position that I held during that period. But no, there was a serious disconnect from the faith at which time nothing seemed to go right for me, " Pastor Hinds revealed.

"I knew within myself that something was missing from my life: I knew I was called of God to serve in the capacity as an evangelist because He had put His spirit in me," he asserted.

He told Family and Religion that he became a Christian in February of 1977 and was filled with the Holy Spirit the same year. He said he left the church and was out for 20 years at which time he ascended to the position of mayor of Portmore.

He disclosed that he returned to the church after he was invited in his capacity as mayor to preach the sermon at a church in Portmore.

"When I saw the invitation, I told my secretary to find out if there was a typographical error. The response we got was, 'no we want you to preach the sermon'."

Pastor Hinds said after the sermon, he was so convicted that he knew he had to return in a puristic way to God and to carry out the work He had put His Spirit in him to do.

According to him, he knew he could not carry out this spiritual obligation and practise politics the way it is conducted in Jamaica. So it was after his political career that he rededicated his life to Christ and surrender himself to be used by Him.

"I don't write sermons: God directs what He wants to be said to his people. All we have to do is to adopt the mind of Christ. Let this mind be in you like that of Christ Jesus," the now-ordained pastor stated, quoting a verse from the Bible.

Pastor Hinds pointed out that his church is having a great impact on the Shanton community manifested by an ever-growing congregation.

"Souls are being saved for the Lord. We reached out to our congregation and the community by providing back-to-school supplies and food for the hungry as well as fulfilling other needs," according to Pastor Hinds.

He said the church is in the process of erecting a building in which to worship, since services are presently held under a big tent.

"We don't believe in soliciting donations alone to erect the church building. We are utilising the lands we own by planting cash crops, the proceeds we are channelling into the building of the church," Hinds said.

Addressing the issue of family values, he said families must return to the basics.

"In my view, there is not a financial problem in Jamaica. There is only a breakdown in family values. Parents don't insist on little things such as the family eating together," he said.

"We have to return to the days when every member of the family sits at the dinner table for major meals," he contends.

The pastor, who has been with his wife, Marjory, for 18 years and has two adult sons and one daughter living abroad, said the church has a great role to play in reconnecting families to the old-fashioned value system that is based on love and respect.

"We must begin to instill the principles of love and respect in our children, two principles that are essential to the Christian life," he suggested.

"My wife is my greatest support, I call her 'my handbag' to illustrate her importance in my life. She is also a great help in the ministry," pastor Hinds informed Family and Religion.