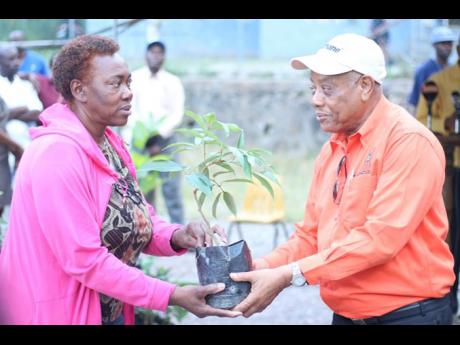 Efforts are under way to more than double the production of coffee in Mavis Bank St Andrew as the community recovers from the devastating bush fires of last year.

"In the coffee-growing area up here about 1,000 acres of new coffee will be planted, plus the resuscitated coffee, which will bring the production of coffee in this area to about five million pounds up from the 1.9 million pounds that is being supplied now," declared Lenworth Fullerton chief executive officer of Rural Agricultural Development

Authority (RADA), during a tour of the area last week.

"We already distributed some seeds and suckers and, today, we are doing some more distribution of seeds, plantain suckers, and fruit trees and paying the people as we promised for some of the land preparation to rehabilitate the farms and provide shade and income for the farmers," added Fullerton.

Agriculture Minister Derrick Kellier, who led the tour to the Mavis Bank area, also vowed to provide further assistance to the coffee farmers.

"Having given them the amount of time to plant and resuscitate, we are here to give them that other charge for land preparation. We had committed to giving them $30,000 per acre to help sustain them so that's what we are doing today," said Kellier.

"The farmers have been very resilient, they have got back out there after the fires, put their backs into it and we are seeing the results. All in all, these people in the Blue Mountain range have a good future ahead of them," added Kellier.

He urged persons with idle lands in the area to immediately get involved in coffee production. "It is a lucrative crop and the market is guaranteed."

That guarantee was underscored by Norman Grant, CEO of the Mavis Bank coffee factory, the number one exporter of the famous Jamaica Blue Mountain.

Grant noted that more than 4,500 coffee farmers now supply the factory and there are new and resuscitated acres being put in production by the farmers.