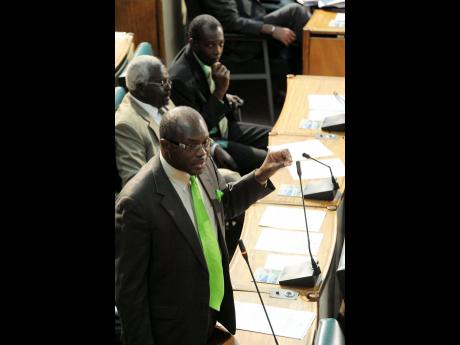 The first comment was ignored, but Warmington wasted no time in throwing the insult back at Hanna.

Controversial Member of Parliament Everald Warmington twice referred to Government Member Lisa Hanna as "a Jezebel" during today's sitting of the House of Representatives prompting her colleagues to rush to her defence.

A Jezebel is a term interpreted to mean a heartless, conniving woman.

Warmington, the MP for South West St Catherine, made the remarks as the members considered a resolution to increase the minimum wage.

The first comment was ignored, but Warmington wasted no time in throwing the insult back at Hanna.

Acting House Leader Natalie Neita Headley rose on a point of order, bringing the matter to the attention of speaker Lloyd B Smith.

Warmington agreed to withdraw the remarks, on the invitation of Smith but decided to engage in testy cross talk with Parchment and Phillips who he referred to as "garbage".

"If it weren't for politics a lowlife like you couldn't talk to me," he said.

When Smith told Warmington that he was being warned for the last time, he stormed from the House asking "a one ears yuh have?".