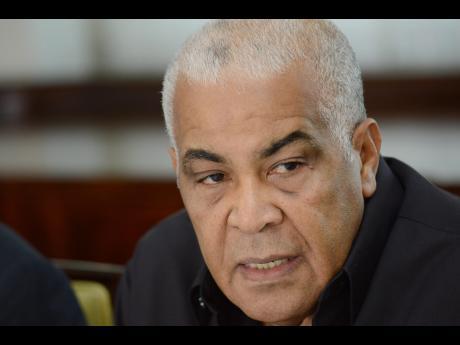 Pickersgill ... I also note the considerable and the substantial value of the project to the Jamaican economy which outweighs all other consideration.

The Land and Environment Minister Robert Pickersgill has withdrawn the order barring the removal of sand from premises owned by the Karisma Group for a development of a hotel in Negril, Westmoreland.

In a release late Monday evening Pickersgill said the hotel had, in fact, received a permit and "no objection" from the National Environment and Planning Agency.

"I also note the considerable and the substantial value of the project to the Jamaican economy which outweighs all other consideration," Pickersgill said.

Pickersgill has, however, decided to restrict the use of the portion of carbonate sand allocated to the St Ann site solely to support the development and nourishment of the hotels beaches.

I have paid keen attention to the debate in the media concerning the matter of the excavated material inclusive of sand produced as a direct result of the preparation of the foundation for the hotel development by Yabyanas Limited.

The development is taking place on lands being those previously occupied by the Mahogany Inn in Negril which was sold by the U.D.C. to the Yabyanas Limited, a part of the Karisma Group for the development of a hotel.

The history of the matter is as follows:

• The Investors applied for an environmental permit to the NRCA to undertake the development and a permit was issued on the 27 day of October 2014 on certain terms and conditions.
• Condition 17 of the Permit indicated that solid waste from the development site should be disposed of at an approved facility identified by the National Solid Waste Management Authority.
• Having received the environmental permit Yabyanas Limited then proceeded to apply for the building permit for the development and obtained the services of Professional Geotechnical Engineers to undertake soil tests to ‘inter alia’ determine the type of foundation that would be best suited to the designed building, bearing in mind load bearing capacity and possible seismic activity.
• The geotechnical engineering report indicated the need for a raft type foundation which could be undertaken in different ways.  The report identified carbonate material (sand), peat and clay as the below surface materials but did not quantify the amounts.
• The developer accordingly submitted its application to the Hanover Parish Council for approval.
• Work proceeded and excavation began.
• The volume of material excavated exceeded what was anticipated based on the technical report submitted in support of the Environmental Permit that was issued by the N.E.P.A. and which necessitated an application for a variation of the Permit.
• The Investor/Developer however applied to the Commissioner of Mines for a licence to transport the material (sand) excavated to another proposed hotel site owned by them in Llandovery, St. Ann. The Commissioner of Mines requested the NEPA’s opinion on the proposal to which a no objection was offered.  The material I am advised belongs to the Developer.
• Subsequently, the Agency on realising that the quantity of material being excavated exceeded the amount contemplated by the Environmental Permit granted and issued a Cessation Order.

I asked the police to enforce compliance of the Cessation Order.

A number of valid questions and concerns have been taken into consideration in making my decision on this matter:

1) The antecedents to the granting of the Licence and the consultation and discussions between the regulatory bodies and representatives of the Developers;
2)  Ownership of the sand;
3)  The planning and environmental laws governing sand, its production, harvesting, transportation and application for beach nourishment purposes;
4)  Requirements for transporting of the sand to an associated development outside of the Negril area owned by the Developer;
5)  Impact of the removal of sand on the coastal ecosystems and the wider environmental management of Negril;
6)  Compliance of the Developer with the planning and environmental laws, and finally;
7)  The appropriateness of my enforcement of the Cessation Order issued under the NRCA Act.

As Minister, I have reviewed the entire matter and on advice have come to the following conclusions:-

1. That the Sectoral Policy Mineral 10 (SPM 10)  in the Negril Green Island Area Development Order does not apply in this instance;
2. That the option pursued in construction of the foundation system was the result of engineering considerations;
3. That the material excavated belongs to the Developer.

I have also take into consideration that the Developer received all necessary valid permits and a “no objection” from the NEPA on which the Developer relied to its detriment before the NEPA sought a Cessation Order.

Having carefully reviewed all the issues and circumstances, I have decided as follows:

1. That the Licence issued by my colleague Minister of Science Technology Energy and Mining on the recommendation of the Commissioner of the Mines and Geology Division is valid;
2. There was a clear misunderstanding of the NEPA’s “no objection” which is normally associated with an Environmental Permit;
3. To allow the Developer to transfer the sand stockpiled at the site to the proposed development site in St. Ann, in accordance with the Licence granted;
4. Restrict the use of the portion of carbonate sand allocated to the St. Ann site solely to support the development and nourishment of the hotels beaches. Sale of the sand is prohibited.   I also note the considerable and the substantial value of the project to the Jamaican economy which outweighs all other consideration.
5. The NRCA/NEPA have been instructed to collaborate with the Quarry Advisory Committee and the Mines and Geology Division to streamline the coordination and approval processes to avoid misunderstanding and a recurrence of any similar nature.  The agreed framework and process flow are to be completed within one month and presented to me and the Ministry of Science Technology Energy and Mining for sign-off.
6. The Chief Executive Officer, of the NEPA and the Managing Director of the Mines and Geology Division to lead a process to develop a national policy on beach sand, including guidelines for importation and an accounting framework.  The first draft of the policy should be produced in six months.

As a result of what I have stated, I will withdraw the Cessation Order forthwith.