Not so fast Audley ... platform statement not supported by documents 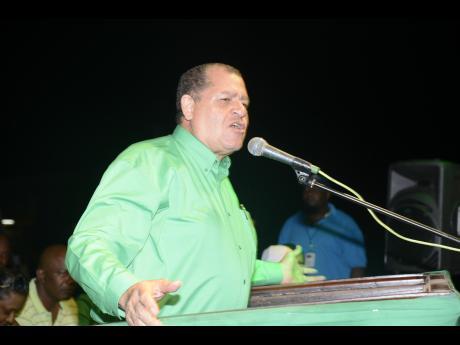 Gladstone Taylor Photo
Shaw said that Spencer’s constituency is being starved of resources as opposed to Arscott’s neighbouring seat which has been getting more than its fair share of state’s resources.

Audley Shaw last night used a political platform in Lionel Town, Clarendon to misrepresent the facts about disbursements on money from the Equalization Fund to the 22 divisions in the Clarendon Parish Council.

Shaw, who had earlier raised the matter of disbursements from the Fund in the House of Representatives on Tuesday, used the platform in Lionel Town, South East Clarendon to claim that the constituency represented by Rudyard Spencer was not allocated any money from the Equalization Fund this year.

The Equalization Fund represents disbursements to the local authorities by Central Government.

In Clarendon, $100.5 million was spent across the 22 parish council divisions, $51 million of which was spent in South West Clarendon.

Shaw used the Lionel Town meeting to say that Spencer’s constituency is being starved of resources as opposed to Arscott’s neighbouring seat which has been getting more than its fair share of state’s resources.

However, Shaw’s platform statement is not supported by documents which were laid in Parliament on Tuesday.

In South East Clarendon, where the JLP's Rudyard Spencer is defending a 107 vote margin, some $16.5 million from the Equalization Fund was spent across the four divisions -- Palmers Cross; Mineral Heights; Hayes and Rocky Point.

The records show that $6 million was spent in 2015 for the rehabilitation of the Moores School Road in the Palmers Cross Division.

In that same division, Harris road was rehabilitated at a cost of $1.2 million in 2015.

The document also shows that some $2.5 million was shared among all 22 divisions for the trucking of water to drought stricken areas.

Palmers Cross and Hayes are represented by PNP councilors while Mineral Heights and Rocky Point have JLP councilors.