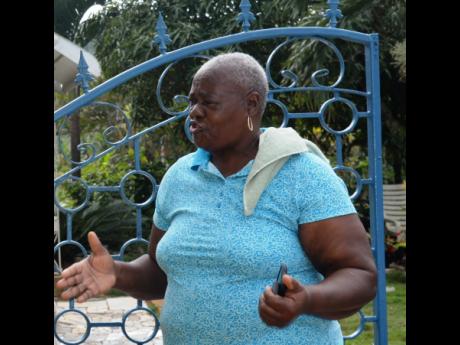 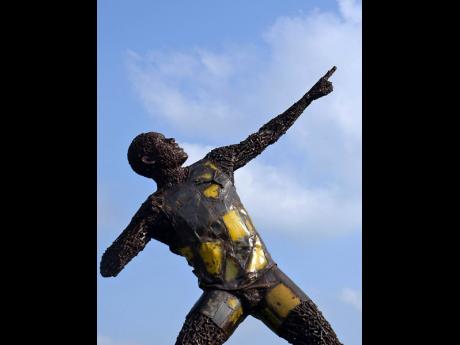 Contributed
Thousands of fans have been converging on an exhibition dubbed 'Yard Art' in the town of Varel, Germany to see 'Bolt of Bolts', a larger-than-life iron statue.
1
2

Lillian Bolt, the outspoken aunt of track and field superstar Usain Bolt, is hopping mad that nearly three years after a bold announcement that a statue of her world-famous nephew was to be erected in Falmouth, Trelawny, it has not been done.

"We have no government, no government at all ... it only takes smart governance," said Ms Bolt as she pointed to what she believes is needed to make the project a reality.

"We cannot ignore the support from the private companies, but successive governments had the opportunity to play a significant part, because he has dominated the world like no other athlete, he caused the world to watch athletics again, and most important, achieved more than any other track athlete, yet no monumental recognition ... not even a statue, not even a bust," added a obviously disappointed aunt.

Drawing reference to the global admiration that the legendary star athlete has been generating since he took the world by storm, winning three gold medals in the 2008 Olympic Games in Beijing, China, Ms Bolt used the Bible to describe her feelings.

"He is a foreigner in all the other countries that he visits, but they have shown that they value his worth more than his own people," said Ms Bolt, the elder sister of Wellesley Bolt, the track star's dad.

"The Bible is never wrong, a prophet has no honour in his own country, and that is so true with Usain."

According to Ms Bolt, in the aftermath of the news that a statue of the superstar was to be erected inside the Falmouth Cruise Ship Pier two years ago, she said got an invitation from the Port Authority of Jamaica (PAJ) to attend the unveiling of a statue but has not heard anything else since.

Garth Wilkinson, the chairman of the Trelawny Parish Council and mayor of Falmouth, told The Sunday Gleaner that while there was a proposal for a statue of Bolt to be erected at the Falmouth Pier, he was among those who objected to this plan as he believed that it would be off-limits to ordinary Jamaicans.

"We stated our objection," said Wilkinson, who said his preferred option was to have the statue mounted in Water Square in the town, which is accessible to all and sundry.

"I cannot say what happened after that. One thing I do know is that such a monument would be great for the people of Trelawny and Jamaica."

In an April 2013 article on the Ministry of Transport, Works and Housing website, it was reported that the PAJ had agreed to partner with the Usain Bolt Foundation to erect a statue of the sprint icon at the Falmouth Pier.

It was to be created by Kay Sullivan and was scheduled to be unveiled during the 2013-2014 winter tourist season.

Efforts to get an update from the PAJ were unsuccessful but a source at the entity said the project was scrapped. However, the source could not say what caused the change of mind.

Bolt is one of the most decorated track athletes of all times, having repeatedly dominated the sprints in the Olympic Games and IAAF World Championships for most of the past decade.

Unlike in Jamaica, statues of the champion sprinter can be viewed at several places around the world, including Varel in Germany; Birmingham City in England; and at Madame Tussauds Wax Museum in London, England.