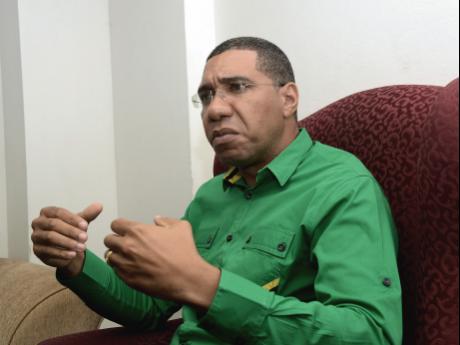 Jamaica Labour Party (JLP) Leader Andrew Holness has made an impassioned appeal to educated, disillusioned Jamaicans to support his party as part of a national cause to ensure economic growth and prosperity for the country.

Holness said he was saddened by the fact that so many bright Jamaicans have turned their backs on the political system.

“The sad thing about it is that some of our brightest people who got the resources of education that some of you who stand up in the rain, in this crowd, didn’t get, they are the ones who are saying dem caah bother and dem naah go vote. I say to those people, consider who will vote in your place,” Holness said.

He stressed that if the uncommitted voters don’t vote then the change for which they yearn will not come.  Only 53 per cent of the 1.6 million eligible voters cast ballots in the 2011 general election.

“Change favours the people who challenge the system. If you want to see your fortunes change, but a ticket in the lottery; put your votes in the ballot box,” Holness said.

Telling Labourites in Lionel Town, Clarendon that opinion polls frequently reveal that persons who vote for the JLP do so because they are better managers of the economy, Holness said the People’s National Party cannot be depended on to bring change in the country.

He branded JLP supporters as the conscience of the people, stating that they vote on issues.

“But you are not the only conscience in Jamaica. There are some other conscientious Jamaicans who have what I call a perverse logic. To them, because of the frustration and the broken promises, dem say dem nah go vote,” Holness said.

The JLP leader, who said that his party has been strident and consistent about the need for a change in the political order, stressed that “Jamaica can’t blame us”.

“I call upon those who say that they are uncommitted; let us form a partnership for prosperity. We gathered here can’t do it alone,” he said.