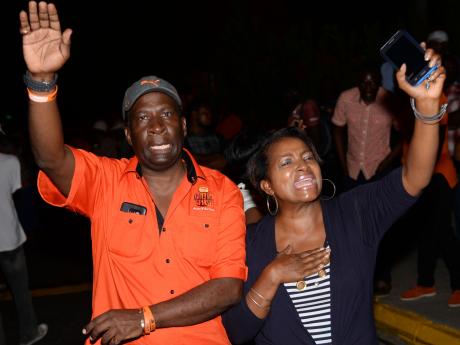 Having abandoned Andrew Holness' Jamaica Labour Party (JLP), Joan Gordon Webley has taken on the job of campaign director for the People's National Party (PNP's) Patrick Roberts and is pulling out all the stops to boot Holness as Member of Parliament for West Central St Andrew.

Holness was elected for a third term as MP by a margin of 1,039 votes in the December 2011 general election.

The PNP believes he is vulnerable and has named his constituency among 12 Corporate Area seats it intends to win.

Roberts, the councillor for the Molynes Division in the Kingston and St Andrew Corporation, has been Holness' challenger since 2002 and has been soundly beaten on all occasions.

Arguing that he is responsible for adding the bulk of the 3000-plus new voters to the list in the constituency, Roberts said that his canvass shows that he has wiped out the deficit from the last election and is ready to move Holness.

"Joan Gordon Webley brings to the table professionalism and a good work ethic.  She knows what is to be done and her main thing is to get the workers to believe we will win," Roberts said.

Holness narrowly won the seat in May 1998 after three separate rounds of voting and five months after the initial December poll in 1997.

Gordon Webley, his campaign manager, also has an unflattering election record, winning only two of six general elections she has contested.