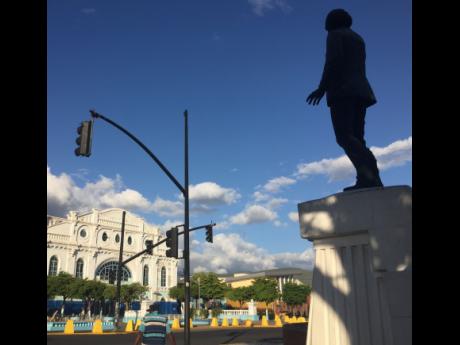 Ricardo Makyn
This statue of Norman Manley looking on at the Ward Theatre is the area where the PNP once hosted mass rallies for the calling of a general election.

There was a time when North Parade was the hallowed ground for the People's National Party (PNP).

All major mass meetings were held on the streets in front the statue of its revered founding father, Norman Manley.

The practice of having meetings at Half-Way Tree changed during the 1990s when P.J. Patterson led the PNP.

Perhaps a picture of a lost era, Manley stands alone in North Parade staring from his statue, at the Ward Theatre, the place  where the PNP was launched on September 18, 1938.

But Dr Winston Davidson, an inner member of the PNP organisation, said the absence of big meetings at North Parade does not mean the PNP has abandoned its founding president.

"From the point of traffic flow, Half-Way Tree is more convenient," he said.

Noting that Half-Way Tree has a transport hub, Davidson said the election announcement has to be held at the most accessible point.

"This is perhaps the best place to hold it. People can come in and get out easily. In the past it used to be held at North Parade, downtown Kingston but more and more, because of the convenience, this is the best place," Davidson said.

He said that while North Parade is symbolic for the PNP, "the fact is that you have to change with the times. You have to always look at what is accessible".