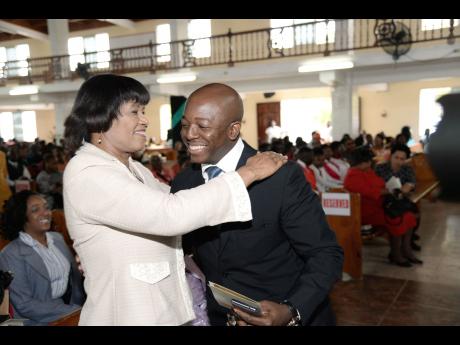 If a legislation to establish the Ministry of Justice's restorative justice programme nationally is passed by Parliament, certain petty offences may not have to go before the already burdened court system, and fewer Jamaicans will end up with criminal records.

The arguments were those of Justice Minister Senator Mark Golding, who said the Government, having seen the success of the pilot programme since its inception post the 2001 Tivoli Gardens unrest, is hoping to extend it islandwide.

"For that to happen, we must have legislation so that the formal justice system can recognise restorative justice as an option that is available in appropriate cases," said Golding.

The minister was speaking at the National Service of Thanksgiving for Restorative Justice Week 2016, held under the theme 'Restorative Justice and our Social Responsibility', at the Portmore Seventh-Day Adventist Church, St Catherine.

Golding said the legislation went through the Legislation Committee of Cabinet last Wednesday and is slated to go before Cabinet today.

Restorative justice is aimed at bringing conflicting parties together to amicably find solutions to conflicts in their communities. It is funded by the Inter-American Development Bank, the Canadian and the United Kingdom governments.

"If these cases can be resolved outside of the court system, through restorative justice, it not only means that the wrongdoer will not have a criminal record, but it means that that case does not end up on the court list as one more case for the already overburdened court system to deal with," he said, noting that communities also benefit as the form of justice is focused on victim's needs.

The programme has been successful in at least eight communities.

Meanwhile, Prime Minister Portia Simpson Miller urged churches among other groups to embrace and learn more about restorative justice as it is fundamental to a more peaceful Jamaica.

"Crime is a scourge that no government alone can defeat. We need our social and moral agents of change, including our churches," she said.

"It is our hope that restorative justice will lead to a more forgiving and caring Jamaica. When that is achieved, I know there will be greater level of peace and security in our communities and our nation," she said.