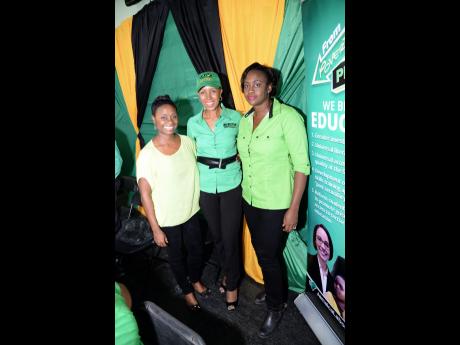 Jermaine Barnaby
The JLPs powerful women in its Area Council One (from left) Juliet Cuthbert Flynn, Fayval Williams and Juliet Holness are among the eight female candidates the party is scheduled to have on its slate on February 25. 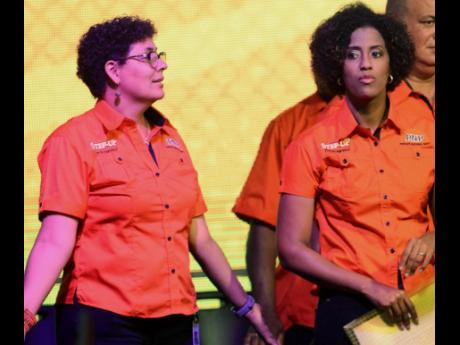 Ricardo Makyn
Patricia Sutherland (left) and Imani Duncan-Price, two of the 13 women who will represent the Peoples National Party in the February 25 general election.
1
2

Amid calls for the introduction of a quota system to increase the number of women in representational politics, the People's National Party (PNP) and the Jamaica Labour Party (JLP) have indicated that only 22 (17%) of the 126 candidates they intend to nominate to contest the February 25 general election will be women.

The PNP say 13 of its 63 candidates will be women, while the JLP will have nine women on its slate of 63.

But students at the Caribbean Maritime Institute (CMI) and the University College of the Caribbean (UCC) say they see no reason for any quota system to increase the number of female candidates.

For Rakeem Thomas, a student at CMI, the performance of Jamaica's first and only female prime minister, Portia Simpson Miller, does not inspire confidence.

According to Thomas, Simpson Miller's leadership has raised doubt in her mind about the ability of women to effectively manage political life.

"I don't think persons would be accepting of having more women in the system because the prime minister got the chance to show what she is about and her behaviour ... leaves persons questioning if women are really capable; so again, she has failed us as a woman, as a prime minister," said Thomas.

She was supported by Danielle Grant, vice-president of the CMI Students' Council, who argued that Simpson Miller does not paint a good picture of female leaders in any way.

According to Grant, while more women may be needed in the political process, they do not necessarily make good political leaders.

It was a similar sentiment at the main campus of UCC as many students said they see no need for a quota system.

"I don't think governance is a gender issue, to say that one gender handles issues better than one. Where I would look at it is from an objective perspective where we should view governance in terms of advancement, in terms of who actually does the job better," said marketing student Chantal Pinnock.