Jamaica has the worst rate of optometrists to patient- Grant 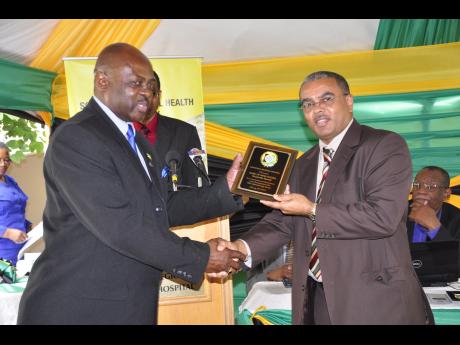 From an old, leaky room that was too small to handle, the just under 2,000 patients it saw annually and the approximately 63 surgeries that had to be performed, the Mandeville Regional Hospital (MRH), through the partnership of the Southern Regional Health Authority (SRHA), Caribbean Council for the Blind, SightSavers, the European Union, the Jamaica Society for the Blind, among other sponsors and stakeholders, recently opened a state-of-the-art ophthalmology clinic and operating theatre.

With the process from conception to execution spanning nearly two decades, the Eye Department has been upgraded from one ophthalmologist and one nurse to four consultant-level ophthalmologists, four resident ophthalmologists and senior house officers, five nurses, and a full-time optometry and low-vision service.

Chief Executive Officer at the Caribbean Council for the Blind Arvel Grant, during his address at the official opening ceremony, said the rate of blindness among citizens has increased due to the low number of optometrists and the lack of resources.

Currently seeing more than 15,000 clients yearly and performing more than 500 surgeries, the region now has four refractionists and is preparing to launch a region-wide diabetic retinopathy screening and treatment programme to combat the alarming rates of debilitating eye defects.

However, with the SRHA directly covering the parishes of Manchester, St Elizabeth, and Clarendon, a call is being made for all parishes and community hospitals to move towards retrofitting spaces for eye care.

Minister of Health Horace Dalley, who delivered the keynote address at the opening, said that public-private partnerships are crucial to the growth and development of the health sector as the $55 billion budget cannot manage all that needs to be done.