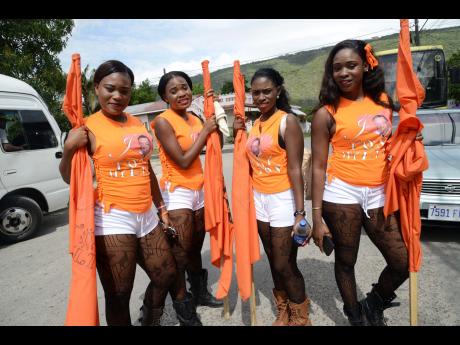 Norman Grindley
Tony’s girls are not just eye candies, because they do canvassing and political education in the constituency.

The pieces, which include Anthony Hylton-branded shoes, are designed by Racquel, a party worker from Waterhouse.

Hylton described Tony's Girls as young, enthusiastic ladies who want to be a part of the campaign.

"Many of them are people we have been working with throug-hout the year, and so, this is their expression of support," Hylton said.

The girls said the pieces are provocative "because we a PNP girls".

"We nice and clean like that. Ugly people nuh stay inna PNP," one of the girls said.

Asked what he thought about the outfit, Hylton, surrounded by the girls, smiled and then offered this response:

"Our constituency is a creative constituency... musicians, fashionistas, everything. The creative economy is what we support in Western St Andrew," Hylton said.

But Tony's Girls are not just eye candies. They do political work such as canvassing and political education in a bid to secure votes for Hylton.

"Notwithstanding any margin that we had from the last time, our intention is to ensure that we have a greater turnout," Hylton said.

Hylton won the seat by 5,150 votes in 2011. He is nominated to face off against the Jamaica Labour Party's Trevor Webb in the February 25 polls.