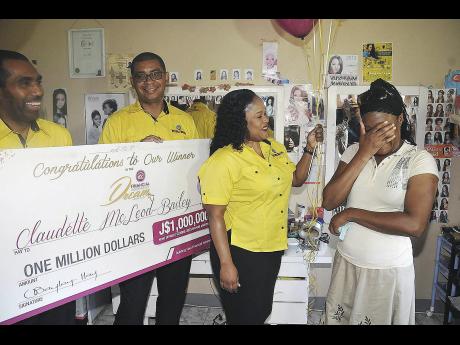 Claudette McLeod Bailey will be able to achieve one of her 2015 financial goals that of renovating her home thanks to Victoria Mutual Building Society (VMBS). McLeod Bailey, recently won the top monthly prize for December in the organisation's Financial Independence Dream Promotion.

She won $1 million which can be used for the deposit and/or closing costs on a house or a home makeover.

McLeod Bailey, who is a hairdresser by profession, received the surprise when the Victoria Mutual team and Susan Simes of the 'Susan Show' visited her salon in St Mary and made the revelation.

Moved to tears by the news, McLeod Bailey stated, "I am in shock, but I'm very grateful that I won. I always tell my church members to enter this competition, and I also prayed that it is someone who needs the prize who wins it."

"I have been saving to redecorate my house and now I can actually do it," added an overwhelmed McLeod Bailey.

Rickardo Ebanks, vice- president, centralised services at VMBS, congratulated McLeod Bailey on her win. "This win is at the heart of what Victoria Mutual stands for, helping our members on their journey to build their financial independence by achieving their financial goals.

We are happy that we will be assisting Claudette to achieve her goal to renovate her home," Ebanks said.

Audley Knight, assistant vice-president, sales and service, Western Region, at VMBS, said, "Victoria Mutual is grounded in the principle of mutuality; everything we do is for our members' benefit. So the idea of our special prize for January in the competition was another way of passing on significant benefits to our members and clients."

The Victoria Mutual Financial Independence Dream Promotion started last October 2015 and gives new and existing members numerous chances to win more than J$16 million in prizes for every J$25,000 in their VMBS savings or deposit accounts on each draw date. The grand prize is a two-bedroom house in Caymanas Country Club Estate valued at J$13 million.

The competition runs until April.