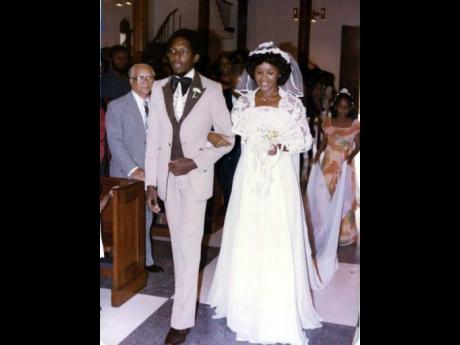 Contributed
Esther Tyson and her husband Rawle leaves the altar after tying the knot. 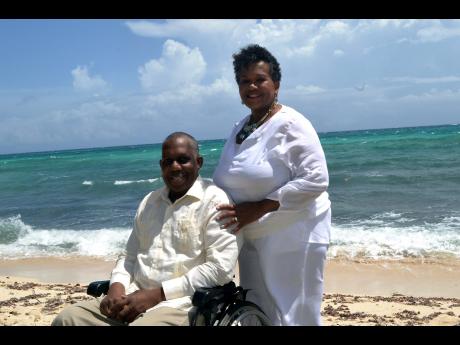 When Esther Tyson signed on to forever seal her life with Rawle Tyson on December 29, 1979, she had already determined that she was in for the long haul.

Married to a very busy pastor and businessman, while she, at the time, was vice-principal at the St Andrew High School for Girls, Esther had her hands full being a career woman and wife. Looking back, she shared with Family and Religion how they kept the family unit intact.

"We used to have regular lunch dates. He would pick me up at school and we would go out to eat and catch up. In addition, we ensured that the children went to bed at 8 p.m. each night, so if Rawle was not out at a meeting, we would spend time talking. We did that a lot. We enjoyed being friends with each other," she reminisced.

Six days away from celebrating yet another anniversary, Tyson's world was shattered when her husband was attacked and shot by a gunman. One of his workers was killed in the incident.

She still remembers the shock and pain she went through during that period.

Her husband, intending to give the workers a Christmas bonus, allowed for cash payment that morning, diverting from his usual habit of having them deposit the payment and taking the payment slips. The secret must have been let out as gunmen struck that morning, leaving Pastor Tyson a paraplegic.

"I did not cry. I think I went into coping mode. I had to manage. I asked God to help me," she shared.

She had prayerful support from friends and fellow church members, including those her husband had impacted during his time as a pastor of their church, Christian Life Fellowship, then Mona Fellowship.

"The church activated a plan to get financial support for Rawle so that he could be taken to Jackson Memorial Hospital for rehabilitation. We went in January 1998 after his lung and diaphragm had healed. We spent three months in Florida, with Rawle being an in-patient for six weeks and an outpatient for another six weeks. We came back to Jamaica, and our lives changed forever," she said.

Esther, like her biblical namesake, was determined that she would not crumble under a challenge. She decided that their lives would go on once her husband went through, what she termed, "his dark night of the soul", and determined to continue with his life. On the first Sunday when he returned from Florida, he spoke from his wheelchair at church on the topic: 'God is Absolutely Good: Holding On'.

In 2000, when she took up the position as principal of Ardenne High, her alma mater, she did it with the full support of her husband.

"I had to make deliberate choices as to what I could be involved with since my children were still in school and I also had to give Rawle support personally as he was now a paraplegic."

With those situations facing her, Tyson was conscious of those responsibilities, and it proved to be the motivating factors in helping her to determine how she managed her time and the activities in which she became involved.

Time wasn't the only challenge for her as she was constantly having to make decisions that determined the future of lives and the institution while, at the same time, submitting to her husband at home on matters about which we might disagree.

It helped that she truly believed that God's order was that the man should be the head of his family. "I choose to submit to my husband where we disagree, but that hardly happens," she said.

Just when life had settled into a routine, her husband graduated with his doctorate from Columbia Theological. Tyson's world was again smashed in April 2004 when they were preparing as a family to go to their eldest child, Mikaela's, graduation from Princeton University. Her husband suffered a massive stroke that resulted in him having Broca's Aphasia. This means that all his communication skills had been damaged.

Tyson had yet another challenge on her hands. This time, she was devastated.

"When I realised that all my dreams of us ministering together after our children were grown had been obliterated, that Rawle had suffered a second major damage to his body, I was devastated. I quarrelled with God. I asked Him, 'How could you allow this? We have served you from our youth, we do not desire worldly things, we only desire to build your Kingdom; how could you'?"

She had questions, especially as she was told her husband would never speak again, his peripheral vision had been damaged, and 90 per cent of his understanding had been damaged.

"I cried and cried in that hospital in a way that I had not done when Rawle had been shot. All my dreams had come to nought," she said.

With her husband in a partially vegetative state, she asked God why He didn't take him, as it made no sense!

She regained focus when Carron Gordon, his committed physiotherapist and friend, asked her bluntly, "Whose report are you going to believe?" even as she assured her that her husband would speak again.

Through fasting and prayer, she regained her faith and positive outlook on life.

Today, she has reason to thank God for yet another miracle as her husband defied the doctor's prognosis.

A member of Christian Life Fellowship, 21a Gordon Town Road, with her husband serving as one of the pastors, she serves in various capacities.

Tyson, who hails from Chapelton, Clarendon, is now employed on a contractual basis by the Ministry of Education in a consultancy role, working with the JN Foundation iLead project as a school improvement coach.