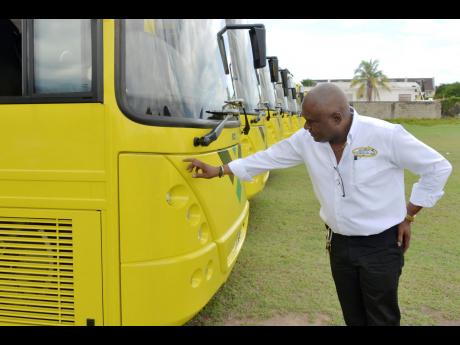 File
JUTC chairman, Dr Garnett Roper, says a total of 62 buses were chartered by the JLP. He says vents were broken on some of the buses while a window was shattered on one.

The Jamaica Urban Transit Company (JUTC) is reporting that 22 of the buses chartered by the Jamaica Labour Party (JLP) for its rally in Half-Way Tree yesterday were damaged while a driver was injured in an alleged gang feud on one of the units.

JUTC chairman, Dr Garnett Roper, says a total of 62 buses were chartered by the JLP.

He says vents were broken on some of the buses while a window was shattered on one.

He says video footage from the buses is being pulled and the matter is to be reported to the police.

Dr Roper says this incident follows similar damage to JUTC buses used by the JLP for its Sam Sharpe Square meeting a week ago and for its annual conference in 2014.

He explains that the JLP has not yet paid for the damage.

Roper says the approval was given for the JUTC to allow its buses to be chartered for yesterday's meeting despite the board stipulating that no further business should be done with the JLP until the outstanding bills are cleared.

Dr Roper says the behaviour of the JLP supporters is unbecoming.

Meanwhile, the JUTC chairman says the experience has been different with the People's National Party.

He says the party used 160 buses for its January 31 rally in Half-Way Tree and none was damaged.

When contacted, the JLP's deputy general secretary Dr Andrew Wheatley, said he was not aware of the situation.