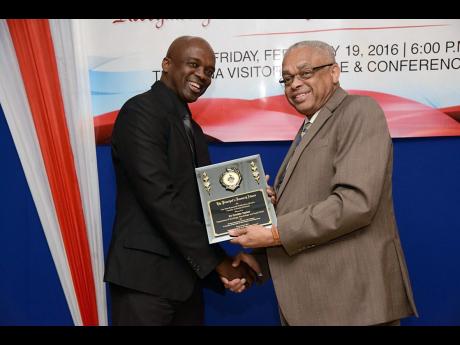 The University of the West Indies, Mona campus, has selected senior lecturer and Gleaner columnist Dr Orville Taylor's Broken Promises, Hearts and Pockets: A Century of Betrayal of the Jamaican Working Class as the best publication in the category of Books for the Faculty of Social Sciences.

In his book, Taylor provided useful insights into the history of labour relations in Jamaica.

The book includes policy recommendations, and guidelines for the way forward to better leadership in government, worker protection, and other industrial-relations issues.

Taylor used the opportunity to call on the leaders of government in the region to remember the historical past of slavery and its effects on worker attitude and productivity.

"I've been saying things over the years. I've had a number of academic publications. At the end of the day, you want to write something so the average Jamaican, black, Caribbean person can walk into a bookshop or walk into a library and take it off the shelf and read it.

"It also has 19 pages of policy recommendations, so it is not simply one of those theoretical academic, purely research, and critical work," said Taylor.

"It says to the Government, the people who we have elected, or those who sit in Opposition that this is what history has told us. Learn from history. Here are 19 pages of recommendations as to how we can go forward," said Taylor.

He also highlighted the need for Jamaica to give more credence to the legacy of National Hero Marcus Garvey and his contribution to the development of Jamaica's labour agenda.

Taylor noted that some of the material in the recommendations was taken from Marcus Garvey's 1929 manifesto.

"Very often, when you talk about Marcus Garvey, people speak of him as some kind of philosopher, which, of course, he was, but Marcus Garvey's work, I realise, was very pivotal to the development of our labour agenda, an oriented agenda, as opposed to a partisan agenda. That is amazing because I developed a new kind of respect for Marcus Garvey," said Taylor.

Several other lecturers in the various faculties were also awarded for their publications in the categories of book, articles, and research that attracted the most research grant.