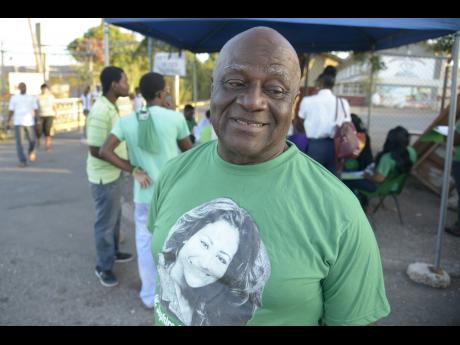 Silburn Forrester. He and his wife of 26 years are voting for different parties.

Silburn Forrester, the father of Jamaica's 2016 Rhodes Scholar Sherona Forrester was among the first in line at the Mineral Heights Primary School this morning to vote for the candidate he believes can provide the best educational opportunities for youth in Clarendon South Eastern.

That party, he said, is the Jamaica Labour Party (JLP).

Forrester, and his wife of 26 years are voting for different parties.

But he said their home is still harmonious.

"We are best friends same way," he said.

Spencer is hoping to secure a fourth term in office and is considered to be in a close battle with People's National Party (PNP) candidate Patricia Duncan Sutherland.

He won the seat by only 107 votes during the 2011 General Elections.

The Mineral Heights division was one of those he claimed.

"I am hoping that whoever wins, have a good plan for education, because to be bright is good. Bright takes you out of poverty," said Forrester.

Sherona is preparing to study at the prestigious Oxford University in England in a few months, while her sister is a second year student at the Norman Manley Law School.