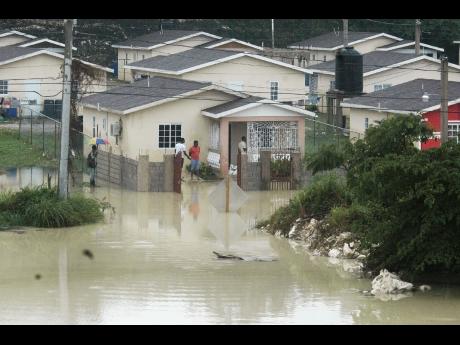 Adrian Frater
A section of Montego Bay under water yesterday.

The heavy rains that have been lashing sections of St James since last Friday afternoon resulted in significant flooding in several sections of downtown Montego Bay yesterday.

"We have had reports of Creek Street, Dome Street and the Sign main road being under water at this time," Montego Bay Mayor Glendon Harris told The Sunday Gleaner shortly after 1 p.m. yesterday.

"We have teams from the National Works Agency, the police and the St James Fire Department out there monitoring the situation."

As a result of the flooded roadways, traffic was reduced to a snarl in some areas and came to a complete stop in other sections, creating a nightmare for motorists and pedestrians alike.

"Round a Creek Street nuh good again," one motorist shouted to another, who was asking where he could drive to get to Mount Salem. "It better you just pull over and get a nap because you won't be able to drive on Creek Street."

A man who was trapped in a vehicle on the Sign main road was lucky to escape with his life after his car stalled with floodwaters rising around him. He was rescued by a team from the St James Fire Department.

"Except for the man who was trapped and was rescued by the fire people, we have not had any other reports of persons experiencing any danger," said Harris. "We will continue to monitor the situation with a view of providing whatever assistance that anyone might need."

At the Port Bello Housing Scheme, several persons were forced to vacate their houses as a nearby pond overflowed its banks, sending water gushing into their homes. A pump house, which was put in place to move water from the pond, was also flooded.

"No houses should have been built here ... . This is what happens every time we have a serious rain," a resident told The Sunday Gleaner. "If this rain should continue into tomorrow (today), the entire scheme will be flooded."

While most residents took the flooding seriously, some persons found a way to put a political spin on the situation.

"Yesterday, people were all over the place bawling out fe 'shower' so this is nature answering their call," said an elderly man, in reference to the Jamaica Labour Party (JLP) supporters, who were out celebrating their party's victory in last Thursday's general election. "Take the shower! This was what you guys were asking for!"

Not to be outdone, a JLP supporter quipped that it was showers of blessing to wash away People's National Party (PNP) corruption.

"Yu mean nature is washing away PNP corruption ... . When the rain finish, we will have a fresh, green Montego Bay," said the JLP supporter.

In the meantime, the Meteoro-logical Service yesterday reported that a cold front that was forecast is now affecting Jamaica and is expected to move slowly towards the east over the next two days.

Satellite imagery and radar observations yesterday indicated that moderate and, at times, isolated heavy showers have been affecting sections of northern parishes.