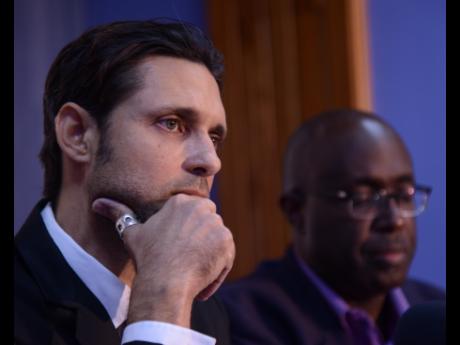 File Photo
Brian Schmidt (left) and Gary Allen Commissioners at the Jamaica Debates Commission at a press conference on February 11.

While he was not willing to disclose a figure, Deputy Chairman of the Jamaica Debates Commision (JDC), Brian Schmidt has said that the commission expended significant sums in preparation for the staging of political debates that should have been held before the general election.

The JDC had invited the Jamaica Labour Party (JLP) and the People’s National Party (PNP) to participate in a series of political debates before the February 25 election.

The PNP, however, took a decision not to participate, resulting in a cancellation of the planned debates.

Schmidt told The Gleaner that the commission had incurred significant costs with the cancellation of the debates.

“We prepared the set and things like that so there was some work done ... it was a significant expense,” he added.

According to Schmidt, the Debates Commission will be examining its rules and guidelines to see what changes can be made to help to prevent any cancellation of future debates.

Former Prime Minister Bruce Golding has, however, urged the JDC not to change the debate rules.

“What I am more concerned about is what appears to be the inclination of the debates commision to go back and revise the rules. There is nothing wrong with the rules. I would not want to see them change the rules, they should maintain the rules. If a party decides that they don’t want to debate, the question and answer session will proceed on the basis of who is prepared to debate,” he told The Gleaner.

Golding went on to argue that a cancellation of future debates seems unlikely given the political consequences of non-participation.

“I don’t think there is anything you can do to make it mandatory. You can’t force someone to debate. I believe public opinion is going to have to be the safest guardian of that. I would think that the PNP on sober reflection will realise that it was a colossal blunder on its part not to debate. The media has been very strong in supporting the practice. I don’t think that it is something that is likely to recur”, he said.