Fathers Charles and Vaz watch their sons sworn in 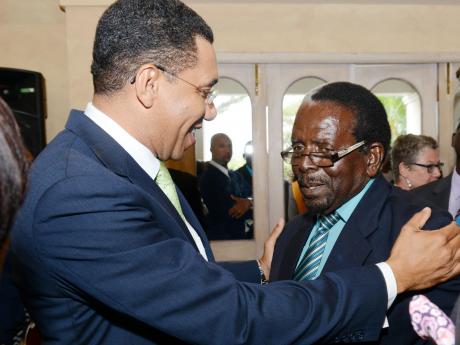 Daryl Vaz Minister Without Portfolio in the Office of the Prime Minister beside Dr Christopher Tufton, Minister of Health at the swearing-in ceremony - Ricardo Makyn Photo

Pearnel Charles Snr sat in the front row of King's House ballroom alongside Prime Minister Andrew Holness witnessing some of his Parliamentary colleagues being sworn in as government ministers.

But for the first time in 36 years, the veteran politician would not be sworn in as a Cabinet Member to a Jamaica Labour Party (JLP) administration.

Instead, it was a day when Charles was instrumental in the passing of a political baton.

Although his son, Pearnel Charles Jr., was not named to the Cabinet, he has been appointed a junior minister.

It was also a day when families and friends as well as loved ones and supporters reserved the moment for the people who made it to the executive branch of the country's governance structure. Douglas Vaz, who on more than one occasion, took the spotlight as a Cabinet member was on hand to witness a similar oath being taken by his son Daryl.

Then there were the influential figures in the public sector, obviously aware that they could be impacted the Cabinet members sworn into office.

With crime and the economy listed among the targeted areas in the Holness-led administration, among the attendees were: Central Bank governor Brian Wynter, Police Commissioner, Dr Carl Williams and Dennis Morrison, President of the Jamaica Court of Appeal.

Prominent business leaders also ventured out to witness the oaths being taken by the team with which they will interface.