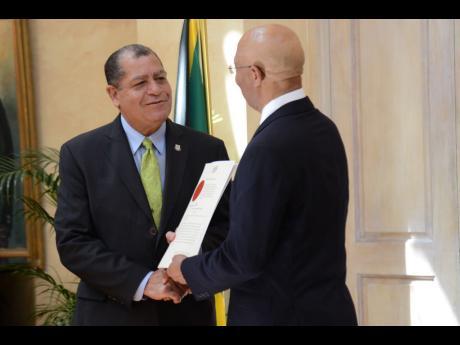 The tabling of the 2016-2017 Estimates of Expenditure will be slightly delayed as the new Andrew Holness-led administration is moving feverishly to craft a new Budget.

“The first thing we have to do is to construct a budget and that’s the first order of business because the budget year is on us so there might be a short delay in terms of the presentation of the Budget,” newly appointed Finance and Public Service Minister Audley Shaw told The Gleaner yesterday.

Shaw signaled that there was no time for partying, noting that immediately after the swearing-in ceremony at King’s House, he would be heading to National Heroes Circle in Kingston, where the finance ministry is located.

“That’s why I am going there now. I am leaving here now, not to go to a party, I am going to National Heroes Circle right now. We have to hit the ground running because we have a lot of work to do,” Shaw said.

Commenting on the creation of a super ministry in the Office of the Prime Minister to drive economic growth and job creation, Shaw said the agenda is to move the country from “stabilisation” to GDP growth.

He argued that the policies of the Ministry of Finance would have to be calibrated to be supportive of that growth agenda.

“The issue is that we are committed to continue on a path of fiscal prudence while at the same time seeing what measures we can take to unlock the path to growth. It is a challenge but we know it can be done.”

Shaw emphasised the need for government to remove bureaucratic hurdles to investment.

“I know that a lot of people want to invest in the country but we have to find a way to make it easier for them to smooth a path, to cut the red tape and to get things done.”

Shaw’s colleague minister Daryl Vaz, who will be working out of the super ministry in the Office of the Prime Minister said while it is early days if he is given the responsibility to cut red tape in an effort to pave the way for investment he would immediately target those projects that are stuck in the pipeline.

“If I have been given that responsibility what I want to do is to facilitate investors, especially what is in the pipeline now that can get out and create jobs and growth. In the meantime simplify the process to allow for less need on facilitation and more need on efficiency.”

Turning his attention to the proposed $1.5 million tax-free package, Shaw said he would be meeting with senior staff of the ministry to start the briefing process.

“The $1.5-million tax-free package is on the agenda and we have to bring all the technical team together to fine tune the Budget. It remains the objective of the government and a specific plan to be implemented,” Shaw added.

“That’s a part of the growth agenda too, we believe that ploughing $11 billion or $12 billion back into the economy via a give-back to the workers of the country - that is a part of our growth agenda, it’s part of stimulating the economy.”