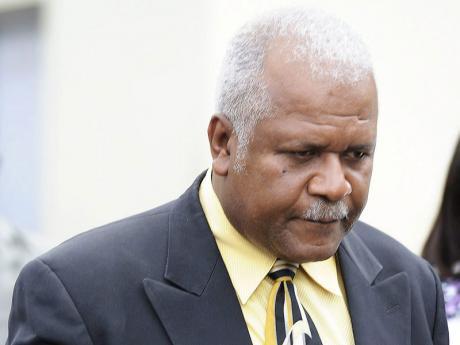 Al Miller ... charged after then fugitive Christopher 'Dudus' Coke was held in his vehicle along Mandela Highway in St Catherine in 2010.

Attorneys for popular pastor the Reverend Merrick 'Al' Miller have been barred from using evidence given by retired police commissioner Owen Ellington before the west Kingston commission of enquiry in the clergyman's corruption trial.

The ruling was made by Resident Magistrate Simone Wolfe-Reece in the Corporate Area Criminal Court a short while ago.

Miller is on trial for attempting to pervert the course of justice. He was charged after then fugitive Christopher 'Dudus' Coke was held in his vehicle along Mandela Highway in St Catherine in 2010.

At the start of Miller's corruption trial, Ellington had refused to cooperate with the defence team.

However, he appeared before the Sir David Simmons-chaired West Kingston Commission of Enquiry to give evidence about, among other things, holding discussions with the popular pastor to assist with Coke's arrest.

However, yesterday, when Miller's attorney Jacqueline Samuels-Brown attempted to include excerpts of the former commissioner's testimony in Miller's corruption trial prosecutors objected on the grounds that it was not in keeping with the rules of evidence.

"Having looked at the law carefully this court is upholding the objection and will not allow the defence to enter the evidence ," Wolfe-Reece ruled.