Carnival is a mockery of the lenten period - Pastor 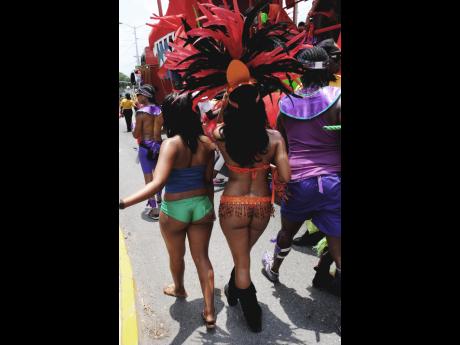 File
A scene from a carnival road parade.

The Lenten season is almost over and so, too, is the carnival period. In fact, both got started around the same time.

Can you imagine that a period set aside for solemn religious acknowledgement also marks a season of gyrating and revelling?

At first, Christians were displeased with the fact that the start of Lent also marked the start of carnival in Jamaica, but over the years, it seems as if they have given up the fight to have this changed.

The Reverend Teddy Jones of the Jamaica Theology Seminary and pastor of Shalom Missionary Church said carnival during Lent is wrong and should be discontinued.

"I think it's inappropriate and a mockery of the season. It's the very antithesis of Lent. Lent subdues the flesh and carnival glorifies the flesh," he said.

And though Jones believes that Christians have been very passive about the matter, he does not believe they should protest against it - at least not by demonstrating with placards or "writing daily articles for print".

"First of all, the Church in Jamaica is not united on the matter of Lent, in terms of our commitment to the Lenten period. The traditional churches, some of them hold to Lent very seriously, so it is very significant to them; but by and large, the majority, I think - particularly the evangelical community - do not take it in the same way. So it is really just a weekend including Holy Thursday, Good Friday and Easter, and that's it," Jones told Family and Religion.

"So the whole essence of self-subjugation, self-denial, self-discipline, restraining the flesh and all of that which Lent is about in the traditional churches, and by that I mean the Roman Catholic and the Anglican Church, in particular, is not shared by the majority of the Christian community in Jamaica. So we ourselves don't take Lent and its symbolism and essence seriously and to the same extent; and so, if we were to arrange some type of protest, then our own division on the matter will be a strike against us," he said.

Jones told Family and Religion that instead of protesting, which he finds to be an ineffective measure which tend to alienate the people who are targeted and cause then to resist, the Church should share their message through sermons and lifestyle.

"The frontier that we need to tackle this from is in terms of our consistent preaching, teaching and living out the ethos of Lent - that is, the life of self-denial, the life of renunciation of the flesh and of self - that we consistently teach and preach and, most important, that we model it before our communities and the wider society so that it becomes a culture that we live by and not an annual event kind of thing.

"Lent needs to transcend that 40 days annually. That's where we need to fight the battle. There are intentional strategies in place to inculcate self-discipline and denial of self. We (Christians) are passive about it (carnival during the Lenten period), but I think that doing something about it shouldn't be about protesting," he said.