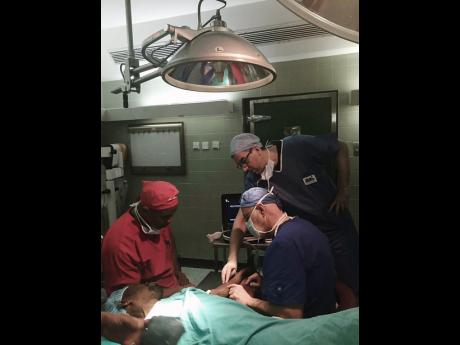 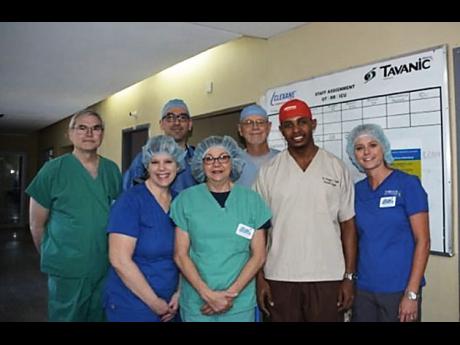 Surgeons at Cornwall Regional Hospital (CRH) are celebrating the success of recent AV Fistula surgeries which have given kidney failure patients independence from catheter (thin flexible tubes) that are prone to infection.

The life-changing operations conducted recently by 'Bridge of Life', a not-for-profit group from Denver, Colorado, and doctors at CRH resulted in the connecting of veins of the patients to their arteries, creating a port for them to receive dialysis.

A 10-member team did approximately 40 operations in four days, a first in the history of the hospital, which has never done more than 25 cases a year. The team included three surgeons, a surgical nurse and a sonographer from the USA and the 'A' surgical team at CRH.

"We have been doing them for a while now at CRH, more than 15 years, but this is the first we have done multiple patients in a single day for fistula creation," said Dr Dwayne Hall, the lead local surgeon who has been doing the surgeries since 2011.

"I do 25 per year due to limited operating time. The assistance received from Bridge of Life has helped significantly to reduce the vascular surgery workload," Hall told The Sunday Gleaner.

He said some of the operations done by the visiting team are in two stages. "I will complete the second stages within six to eight weeks."

Not new to Jamaica, the Bridge of Life introduced fistula treatment at the University Hospital of the West Indies six years ago, after nephrologist Dr Edward Barton sought help from the team.

"We also helped in pioneering a unit at St Joseph's and Mandeville hospitals, respectively," said Sara Hendren, senior director of programmes at DaVita Village Trust, the medical mission with responsibility for Bridge of Life.

Hendren said patients who have catheter are prone to infection because the access port is not good. "You can't swim with the catheter, it's harder to take a shower, and it limits you on the kind of clothes you can wear," she pointed out.

The Davita Village Trust executive said the quality of life for those who use a fistula would be easier. Fistula, she says, last up to 10 years, once taken care of. "We have to teach the patients how to manage their own cases," she stated.

Some 113 patients on peritoneal and haemodialysis use the dialysis centre weekly at CRH.

"The biggest advantage of the fistula is it is free, because we use your own body part to create your own blood vessels," Hall pointed out.

Hall noted that a catheter is expensive and cost up to $28,000 plus taxes, carries related issues such as blockage, insertion site problem, and on occasion triggers thrombosis when inserted in the internal jugular vein.

He pointed out that many patients with kidney failure were wearing temporary catheter because of the economic challenges.

Convinced this would take strain off the dialysis centre, Hall said each person is to be dialysed three times per week, but this happens now only twice per week because of the demand on the system.