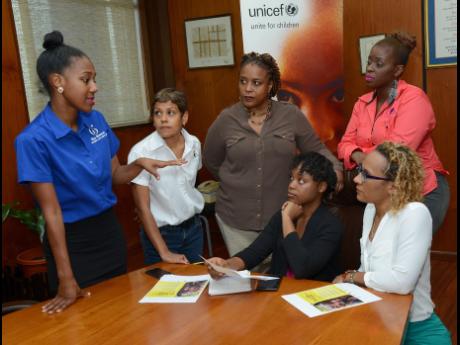 The Office of the Children's Advocate (OCA) is spearheading another initiative aimed at keeping Jamaica's children safe from harm.

Dubbed, 'Keep Children Safe: A National Conversation on Violence against Children', the initiative aims to put the national spotlight on the alarming issue of violence against children.

Reports of child abuse have been increasing every year. In 2014, the Office of the Children's Registry received close to 12,000 reports, including neglect, physical and sexual abuse.

Yet, these numbers do not illustrate the magnitude of the problem as recent research shows that only one in 10 adult Jamaicans are reporting child abuse, despite knowing about it.

'Keep Children Safe' aims to raise awareness of the scale and impact of this challenge - and to explore solutions - through a discussion series that engages key decision makers, parents/caregivers and the public.

According to Children's Advocate Diahann Gordon Harrison: "We see this initiative as a critical way to engage both our children and those who can meaningfully impact their well-being. We are appreciative and excited about the synergies formed with our partners on this initiative. Effective partnerships are vital in addressing the huge challenges facing our children."

Phase one of 'Keep Children Safe' kicks off this week with the first of a series of weekly discussions, and on social media via the hashtag #KeepChildrenSafe.

The first public forum, 'Keep Children Safe in the Community', will be held on Tuesday, at 6 p.m. at the Montego Bay Cultural Centre.

The forum will focus on how violence affects children and their families in volatile communities, and highlight grassroots efforts by the Peace Management Initiative to prevent and interrupt this violence.

The other public forums will be held weekly:

- Tuesday, April 26 - KEEP CHILDREN SAFE from Online Exploitation: Protecting children from online dangers. Featuring reports by the Centre for the Investigation of Sexual Offences and Child Abuse and the Cybercrime Unit at the Knutsford Court Hotel, 10 a.m.

Three accomplished film directors - Ras Kassa, Gabrielle Blackwood and Kurt Wright - are special contributors to the initiative. Each will produce short films that convey the real-life impact of violence.

OCA and partners encourage the public to join a Twitter chat about 'Keep Children Safe' on Monday, April 4 at 7:30 p.m. Twitter users can follow @unicefjamaica to join the chat. To stay informed about the initiative, the public can visit the web page: go-jamaica.com/keepchildrensafe