'Train up a child in the way he should grow' 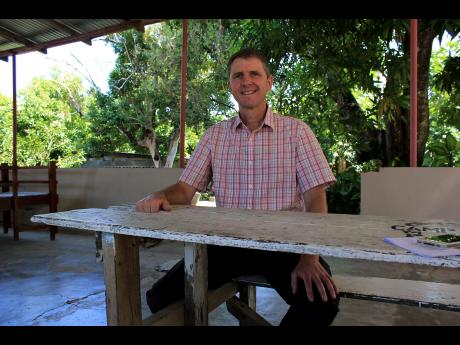 An American preacher who instantly fell in love with Jamaica after travelling to the island last month has called on local farmers to educate more young people about the benefits of agriculture, and make greater use of the country's natural resources.

California-based pastor and secretary of the Adventist Agricultural Association Darren Greenfield believes that there is huge potential to expand the agricultural sector in Jamaica because the climate is perfect for planting.

Greenfield, who was invited to speak at a farming conference hosted last week by the North East Jamaica Conference of Seventh-day Adventists in Robin's Bay, St Mary, told Family and Religion: "We accepted the invitation to come here because their mission is very much in harmony with our own.

"I've been living in the US for the past 23 years, but am originally from New Zealand, which is an island nation, so I know what island life is like.

"The climate here is perfect. When I set foot on the land and felt the climate, I said to myself: 'Man, you can grow a lot of stuff here, and it will not be difficult because it's not too hot and it's not too cold, so the plants won't be stressed.

"In California, we have four seasons, and in winter, you just can't grow anything because it's cold and there's not enough light. But here, the air is clean, which is a blessing, there's lots of sunshine, and you can grow around the year."

The US-based minister believes to a large extent, that Jamaica's success in the future will depend on how many of its young people are introduced to the benefits of farming. He said: "Children who have an agrarian upbringing are far more pure, mature, advanced in their abilities, and in touch with what's going on.

"If we are going to make a difference in society, we have to start when people are young because when you're older, it's very hard to reverse some of the culture you've received. But if you educate young people, they learn things as a way of life. It's like [Proverbs 22:6] says: 'Train up a child in the way he should go and when he are old, he will not depart from it.'"

Greenfield notes that there are spiritual and scientific reasons why young people should look to farming. He said: "There's a bacterium in the soil called bacterium vaccae, which present research has revealed increases your intellect and learning ability and can also reduce cases of depression. So children who get their hands in the soil at a young age are going to develop more, and have grater abilities."

Looking ahead, Greenfield hopes to maintain an enduring affiliation with fellow Adventists throughout north and east Jamaica and offers his full endorsement of their pioneering 'Save Our Schools Through Industries and Commitments' scheme.

He explained: "We would like to sustain a long-term relationship because our organisation is about networking and sharing the resources and information that will assist growers to learn much more rapidly."