WOMAN POWER – Michelle Spence-Kelly defying the odds on her journey 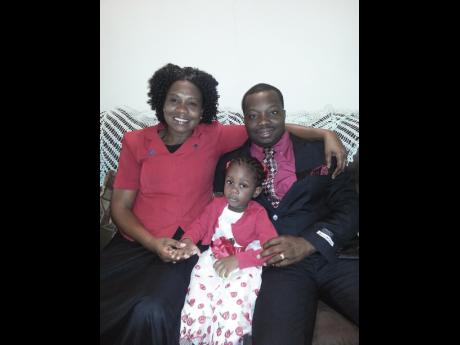 Contributed
Michelle Spence-Kelly with her husband Keeble and their daughter Keeanna.

Life for Michelle Spence-Kelly has been an uphill climb with several hurdles along the way.

Having grown up in a farming community called Bottom Prospect (Johnson) in St Elizabeth, this fearless woman recalls running or walking briskly for miles to get to the Giddy Hall All-Age School and walking back home, sometimes in sweltering heat or torrential rain.

"I have a deep admiration for my grade six teacher, Miss Karen Porter, who encouraged my parents to enrol me in the school's extra-lesson programme in preparation for the Common Entrance Examination. Her belief in me spurred me on, and I excelled even more when I was placed in charge of reading groups," she began.

Growing up in a community that had no electricity was just one of the problems encountered, but it was no deterrent to what Spence-Kelly wanted to achieve

"I had to rise early most mornings and walk for miles to seek transportation. The same journey had to be taken to get back from school (Black River High) as the house was a long distance from the main road, so oftentimes, we had to rely on the use of a flashlight, bottle torch or the moonlight to aid visibility. Sometimes I would be met by my dad, who was very protective of his firstborn. I had to do my homework with the aid of lamplight. My parents would tell me that I was damaging my eyes."

Two years into high school, her parents decided that a change of environment would do her well, so she was sent to live with a female pastor who was relocating to Kingston as part of her assignment. This change was not easy, but she adjusted and was enrolled at the Meadowbrook High School, where she continued to do well. During these years, Spence-Kelly was surrounded by successful individuals who were mostly educators. At the end of high school, she was successful in her examinations. She was later reunited with her biological family.

Securing a job a few years later with the Ministry of Labour and Social Security as a clerk, Spence-Kelly made continuous efforts to be more and do more.

"My lifelong dream was to be a police officer, but my mother, Miss Mercylyn Edwards, was fearful that I could lose my life in the line of duty. I gave birth to my son, Rhomoy, some time after, but taking care of a child on a meagre salary was a struggle, even with the help of my mother and paternal grandmother. But I knew God would open a door."

She added, "It was mere ambition that prompted me to apply to teachers' college. Thank God for the Students' Loan Bureau, as it was through this agency that I got my college fees paid and even received a grant that could be used to purchase books. My parents willingly took on the task of taking care of my son while I attended Church Teachers' College in Mandeville, Manchester.

"It was during those college years that I learnt even more the importance of hard work, learning how to make every dollar stretch, living one day at a time and working as a team."

At the end of those college years, she was the recipient of the Vernal Norman Award for the highest average in Use of English 3 in the entire third-year group. In 2004, she enrolled in the Bachelor of Arts in guidance and counselling programme at the International University of the Caribbean and was the recipient of the Dean's Award for Most Outstanding Academic Performance and Leadership for the region that spans Manchester, St Elizabeth and Clarendon. She was also the recipient of the Martin Luther King Junior Award for most outstanding academic performance at the Caribbean Graduate School of Theology in July 2015, where she pursued a master's degree in interdisciplinary studies, with an emphasis on leadership and management.

Spence-Kelly is an active member of the church and serves on various committees at the Black River Primary and Infant School, where she taught grade four for eight years, and has been the guidance counsellor for the past eight years. She works part-time with the Electoral Office of Jamaica as trainer and supervisor and, at present, is pursuing the Aspiring Principals' Programme with the National College for Educational Leadership.

Even with the death of her beloved father in 2003, she has maintained a true nature of persistence and gratitude to God for her support system.

"Being a mother and guidance counsellor is taxing, but the key is making the time spent together with family memorable. I have the support of my husband, Keeble Kelly, who is an outstanding husband and father who sees it as his responsibility to transport our three-year-old daughter, Keeanna, to school and back. He also assists with her homework and just about any other task. This he struggles to do sometimes as he works as an emergency medical technician with the Jamaica Fire Brigade, Westmoreland Division. My mother, Mercylyn Edwards, and her other family members are a tower of strength also."

She added, "I am blessed with sisters and brothers who constantly cover me in prayer. I constantly seek God's direction before taking any action or making a decision, and when the going gets tough, I fast and pray and network with friends and family."