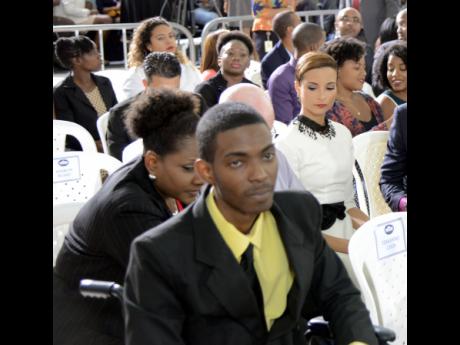 Their concerns are many and they have key roles to play in Jamaica's future, yet their voices are often ignored, and they believe the policymakers are too often neglecting their views.

They are the young Jamaicans between the ages of 14 and 40, loosely dubbed Generation X by some, or 'generation next' by others.

In a recently conducted mobile survey by Respect Jamaica and the local office of UNICEF, a vast majority of the young people, 67 per cent, said the Government does not take the youth views into account when making decisions about them often enough.

"I am looking at it from a rural versus corporate perspective. Many rural Jamaican youths feel that the resources go to corporate Jamaica and then to the rural areas, and so we are left behind," said Delion Bowes, a sixth former at St Elizabeth Technical High School.

"The Corporate Area schools have the resources. Even some text books that we need, we have to be going to the Corporate Area to get them," added Bowes, who is a member of the national youth advocacy group Y-Klick.

He said that while his concerns are not new the Government, instead of directly addressing the issues, they find piecemeal solutions.

The youth survey, which was conducted between February 29 and March 2, featured 3,024 respondents, ages 14 to 40, through the Digicel customer base.

It did not segregate participants by geographical location and found only a slight disparity between male and female respondents.

"While this is alarming, it is not surprising. What accounts for this is the tokenism approach that various governments have used," argued 20-year-old Tina Renier, a second year international relations student at the University of the West Indies.

"We are not treated as young adults; we are treated as children. The authority comes with the idea and expect us to buy into it," added Renier.

The outspoken youth advocate said the fact that women believe their voices are listened to less than the men reflects the male domination of the society.

"Males are marginalised in terms of education, but in terms of decision-making, it is still a male dominated landscape, so females are going to feel they are being listened to less."

In the meantime, the survey also found that only 19 per cent of youths believe young Jamaicans are using their voices enough to try to influence the development of the country.

The majority of the respondents (67%) said the youths need to do more to influence development, while 14 per cent said young people, for the most part, remain silent on matters of social development.

The survey, which was largely funded by Respect Jamaica, was to get the perceptions and views of youth on issues of national importance, such as youth engagement in decision-making, governmental accountability, and discrimination.