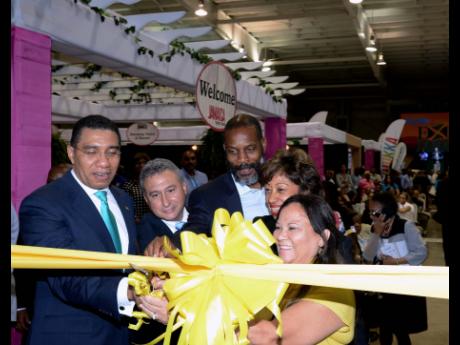 Prime Minister Andrew Holness last night served notice his administration would not tolerate unfair trade practices in the regional and global market spaces, but did not provide any details on the methodology for countering such practices against Jamaican businesses.

“This Government believes in free and fair trade, in open trade, but a weak Jamaica does not make strong trading partners and a weakened Jamaica can’t sustain trade in a way that’s not fair and free. And so this Government will be responsible but will be assertive in ensuring that we benefit from trade,” the prime minister declared to sustained applause during the opening ceremony of Expo Jamaica 2016 at the National Arena.

Holness, who was delivering the keynote address at the expo which is being housed in the National Arena and Indoor Sports Complex and runs until Sunday, was giving an update on new strategies to promote international trade, when he stated, “At this point I want to make some tangential points…”.

His comments come against the background of recent calls for a boycott of goods and services from CARICOM partner Trinidad and Tobago, in the wake of allegations of unfair treatment, by immigration officers, of Jamaicans trying to visit the twin-island republic.

The allegations triggered a call from William Mahfood, president of the Private Sector Organisation of Jamaica, for a trade boycott of that country.

Mahfood however backed off from his call to “cut off access to their goods", explaining that he did not mean a total closure of the Jamaican market to Trinidadian products but rather a temporary ban on some goods until Trinidad and Tobago meets its obligations of fair treatment to Jamaicans travelling to that country.

Meanwhile, Holness did not make specific reference to any incident or name any of Jamaica’s trading partners.

The biennial Expo, which is now in its 43rd year, is the biggest ever, necessitating for the first time the use of the National Arena as well as the nearby Indoors Sports Complex to host the number of exhibitors.