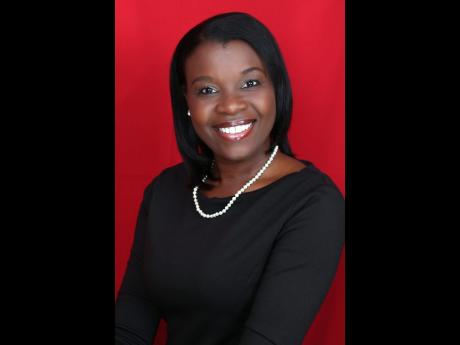 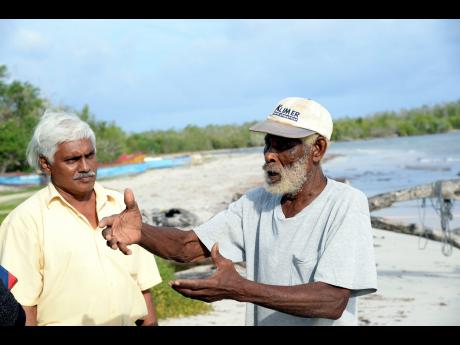 Jermaine Barnaby
Walter Reynolds (right), a former fisherman, speaks about the impact of climate change on fishing in Jamaica, while Henry Gray looks on.
1
2

It was perhaps a gesture by the prime minister to appear "fiscally responsible efficient and frugal" when he announced a Cabinet smaller than that of the previous administration.

One of the casualties of such a move, however, was the relegation of the environment and climate change portfolio into an arm of the Office of the Prime Minister.

Subsumed in what is referred to as his 'super ministry', the Ministry of Economic Growth and Job Creation Office of the Prime Minister.

Be frugal, absolutely, but as it relates to the environment and climate change, can we afford to?

So, more than a month later, and still without any meaningful explanation for the rationale and contemplations for that decision, I am constrained to make a few assumptions.

The announcement of a Cabinet without of a clear separation of the Ministry of Environment from all other ministries exposes a lack of understanding and appreciation of the complexities involved in managing our environment.

The absence must also be measured in the context where, sadly, a majority of Jamaicans pay very scant regard for the environment and many still view the concept of climate change a distant phenomenon.

The announcement of his Cabinet without any mention of the environment and climate change ministry is a perpetuation of that sad reality.

Though it was proclaimed in the Jamaica Labour Party's (JLP) manifesto that "stewardship of the environment is of core value to the JLP", it is not wholly unprofitable to argue, because the evidence thus far suggests that it is and will be a policy of this administration to shun the issues relating to the environment and climate change.

A status quo we simply cannot allow to persist. In that Prime Minister Andrew Holness' announcement days later that the environment portfolio would be subsumed in his super ministry came only after much agitation from interest groups.

This is compounded when one reviews the Throne Speech which sets out the administration's plans for the parliamentary year.

The fact is, save for a passing mention of an intention to review the existing laws governing the environment, the speech was devoid of any real substance on the environment and climate change despite the gravity of the phenomenon.

It is for those realities that it becomes even more necessary to continue to sustain a comprehensive education and dissemination of information about the importance of preserving our environment.

This can only be managed and achieved through a single focal agency with a clear mandate for coordinating environment and climate change issues as they arise in Jamaica.

The prime minister, by his action, has failed to demonstrate an appreciation or understanding that of necessity, a very key component of the role of the Ministry of Environment and Climate Change is that of oversight and accountability, a 'watchdog' of all other ministries to essentially keep the development arm of the ministries conscious of issues that touch and concern the environment.

Any national strategy for development will impact on the environment, and thus a need for a clear separation of the environment and climate change ministry from all other portfolios and within the prime minister's super ministry.

The 'pot luck' of various sectors housed in the super ministry demonstrates a failure to recognise that climate change is a high priority development issue and that there is an unavoidable nexus between climate change and development.

It is an inescapable reality that climate change presents Jamaica, as with the other Small Island Developing States (SIDS), with an unprecedented, vast and multidimensional challenge because of our geographic and socio-economic realities.

We are very vulnerable and we have already begun to see both short- and long-term changes in climate that have, and will, impact on all sectors and affect the overall quality of life for all Jamaicans.

Phenomenon though it may be, the reality is by the end of this century scientists have predicted that Jamaica and other SIDS face the threat of extinction if global temperatures continue on the upward trajectory that it is now on.

The fact is, if we do not respond in a meaningful way those identified geographical and socio-economic realities will render us incapable of responding to serious natural disasters.

The absence of a separate Ministry of Environment and Climate Change is symbolic of an absence of a coherent institutional framework for climate change response in Jamaica and for the integration of climate change adaptation into the development planning process.

In the context of SIDS, Jamaica has been at the forefront of the global environment agenda from as far back as the 1960s and '70s, enacting legislation such as the Beach Control Act, the Watershed Protection Act and the Wildlife Protection Act.

The establishing of a separate ministry of Environment and Climate Change in 2012 by the Portia Simpson Miller administration was lauded by the international community as a positive step in keeping environmental issues at the core of development.

I urge the prime minister to let us restore the high degree of confidence the world has in us as leaders on the front line of climate change by restoring a ministry with a mandated purpose of establishing and implementing a national climate change strategy to systematically, successfully and sustainably address this mammoth challenge.

- Senator Sophia Frazer Binns is an attorney-at-law and the opposition spokesperson on land and the environment. Feedback to editorial