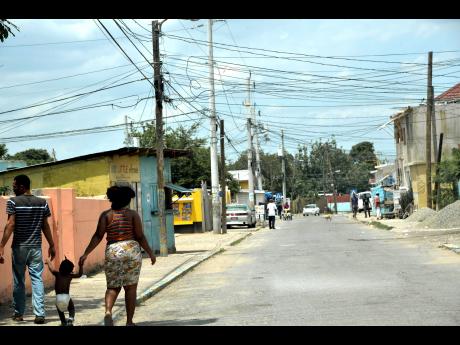 Norman Grindley
Residents walk along a section of Balcombe Drive in Waterhouse, St Andrew, following a shooting in the area last Monday. 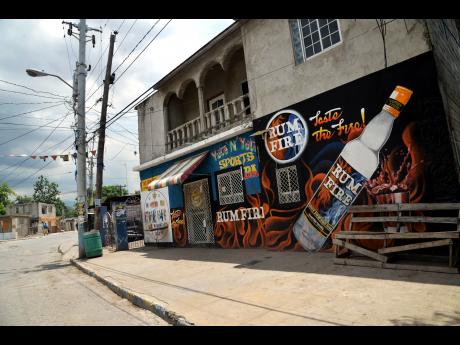 After some four years without any major crimes, tension is rising in sections of Balcombe Drive in Waterhouse, St Andrew, as reports swirl that some gangsters, who were once close friends, have had a falling-out.

Last week, the police kept a close watch on the community following a drive-by gun attack Monday night that left three persons nursing injures, and a community fearing the worst.

The victims were a 30-year-old hairdresser from nearby Victory Road and two males, one aged 27, from Farewell Road, and another from Amsterdam Road.

Two of the victims were treated and released but up to late last week one of the men was still in hospital in critical condition.

Police say the three were shot when a car with a number of men aboard pulled up outside the Yute and Yute Sports Bar on Balcombe Drive.

The men came out of the vehicle and opened fire on persons standing outside the bar, hitting the three.

The injured persons were taken to hospital and investigators from the St Andrew South Police Division launched a probe while instituting measures to try to prevent any reprisals.

"There are no concrete leads but we are carrying out our investigations," said Assistant Superintendent Andrew Johnson, who heads the Olympic Gardens police.

"The area has been very tense following the shooting, and we anticipate that there can be reprisals at any time," added Johnson.

He said no street dances or other public gatherings would be allowed inside the community as the investigation continues.

Sunday Gleaner sources later claimed the shooting could be linked to a dispute involving gangsters angry over the sharing of loot from a recent robbery.

While his investigators are yet to confirm this claim, Johnson said it has not been ruled out as gangsters from an area of the community known as 'Top Lyrics' are known to commit crimes elsewhere before returning to the area to share the loot.

"They are not really giving any problem so much in the area, but they are known to go out to do their crimes before coming back into the area," said Johnson.

"That shooting is the first in about four years. That area has experienced quite a significant reduction in crimes in recent years," added Johnson.

When our news team returned to the area last Wednesday afternoon, the Yute and Yute Sports Bar was closed, but residents who gathered outside said the closure had nothing to do with the shooting incident.

Nonetheless, the tension was still palpable as residents remained watchful.

Some residents responded with discontent at preliminary reports by the police that the three persons were injured during a shoot-out.

"The man them just come and start shoot up the whole place. Nobody knows what this for, but all of the gunshots dem go between here and the bar," said a male resident, pointing to two bullet holes in a nearby cookshop.

"I don't know if is money dem a war over but if is money them need to carry some come give me," laughed a member of a group of women, as they tried to inject humour into a situation that they admitted could cause further upheavals in the community.